Single-Axis,
74 mm to Point of Rotation

Single-Axis,
50 mm to Point of Rotation

All goniometers feature
a fixed point of rotation
above the stage platform. 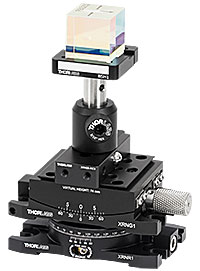 Thorlabs' XRNG Series Goniometers (or goniometric stages) provide ±8° of precise rotation about a fixed point in space. These goniometers use crossed-roller steel bearings to support precision motion and high load capacities. The top and bottom plates are machined from cast tool and jig aluminum for minimal internal stress and improved stability. The anti-backlash leadscrew drive and a vernier scale provide accurate and repeatable positioning. Stage rotation can be locked via a lock plate that accepts a 5/64" (2.0 mm) hex key or ball driver. The adjuster knob can be removed using by loosening the setscrew on its shaft using a 0.05" hex key, reducing the overall length of stage for constrained setups. With the knob removed, the drive shaft can be actuated using a 5/64" (2.0 mm) hex key.

The distance from the mounting surface to the point of rotation is designed so that an XRNG2(/M) may be stacked on top of an XRNG1(/M) stage and both stages will rotate about the same point. The XRNG-K1(/M) dual-axis kit consists of two such complementary stages which must be connected by the user. The stages may be mounted directly to a table or breadboard, onto a baseplate, or onto another XRN series compact stage. Refer to the table to the right and to the diagrams below for details.

The top and bottom of each stage feature quick-connect dovetails (as shown in the lower right image) that allow for the construction of multi-axis systems without the need for additional hardware. The stages are secured by a single dovetail locking mechanism that can be actuated with a 3/16" (5 mm) hex key. The 2" dovetails on our XRNG series stages are directly compatible with the dovetails on the stages shown in the selection guide below. Additional functionality is provided by a complete line of accessories that include multi-axis assembly kits, rail carriers, a rotation adapter, and rails. An adapter plate is also available for mounting these compact stages with an integrated 2" dovetail onto translation and rotation stages with a 3" dovetail. For more information about our quick-connect construction components, see the Quick-Connect Stages tab.

Note: Using mounting hardware that exceeds the tap depth of the mounting holes will damage the stage. Before mounting components onto the goniometers, please review the mounting hole tap depths listed in the table above and on the support documents, accessible by clicking on the red Docs ( 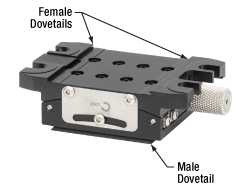 Click to Enlarge
Figure 1: An example of how to read a vernier scale. The red arrow indicates what is known as the pointer. Since the tick mark labeled 10 on the vernier scale aligns with one of the tick marks on the main scale, this vernier scale is reading 75.60 (in whatever units the tool measures).

That is essentially all there is to reading a vernier scale. It's a very straightforward way of increasing the precision of a measurement tool. To expound, let’s look at Figure 2. Here we see that the pointer is no longer aligned with a scale line, instead it is slightly above 75.6, but below 75.7; thus the gross measurement is 75.6. The first vernier line that coincides with a main scale line is the 5, shown with a blue arrow. The vernier scale gives the final digit of precision; since the 5 is aligned to the main scale, the precision measurement for Figure 2 is 75.65.

As we've seen here, vernier scales add precision to a standard scale measurement. While it takes a bit of getting used to, with a little practice, reading these scales is fairly straightforward. All vernier scales, direct or retrograde, are read in the same fashion. 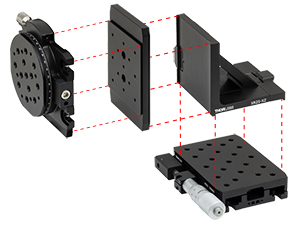 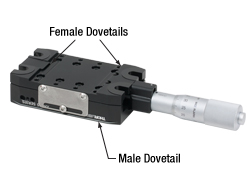 Our XR series manual stages feature quick-connect dovetails that allow for the construction of multi-axis systems without the need for additional hardware. The common dovetail feature with a single locking clamp makes it quick and simple to swap parts in and out while preserving excellent orthogonality.

Our selection of products with a quick-connect dovetail includes: 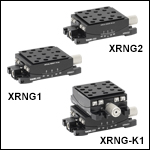 Click for Details
Mounting Features
This diagram shows a single-axis goniometric stage; dual-axis stages have the same mounting features. Dimensions in parentheses are for metric stages. 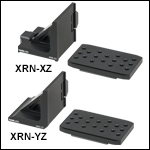 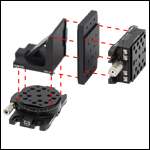 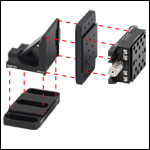 The XRN-XZ(/M) and XRN-YZ(/M) Assembly Kits enable vertical mounting of an XRNG Series Goniometer Stage. These assembly kits can be directly mounted onto a base plate or onto other stages with 2" mating dovetails, as illustrated in the photos to the right. When used to mount a goniometer stage vertically on a linear translation stage, the XRN-XZ kit positions the surface of the goniometer (at 0°) parallel to the direction of linear motion, while the XRN-YZ kit would orient the goniometer stage platform perpendicular to the direction of motion. 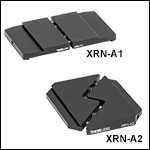 These adapters enable mounting of quick-connect, crossed-roller bearing stages or accessories with a female 2" dovetail to components with a male 3" dovetail, as illustrated in the photos below. The XRN-A1 adapter enables perpendicular mounting while the XRN-A2 enable parallel mounting. The second photo below illustrates a parallel mounting configuration with a smaller footprint.

To assemble, first loosen the dovetail locking screw on the end of the top stage or accessory. Position the adapter on the bottom stage or rail, as illustrated in the photos below, then align the top component on the adapter. Lastly, tighten the dovetail locking screw (maximum torque: 15 in•lbs) on the end of the top component until the entire assembly is secure. Please note that the deep-set screws in the sides of the adapter are not user adjustable. 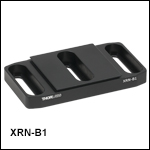 Click to Enlarge
Stages can be mounted vertically using a vertical assembly kit and the XRN-B1 base plate.

The XRN-B1(/M) baseplate offers additional mounting flexibility for coarse positioning of the XRNG series goniometric stages within a setup. Three 1.26" long, 1/4" (M6) counterbored slots allow for coarse translation adjustment of the stage. The orthogonal dovetails on the top of the base plate allow the stage to be mounted in two orientations. The middle slot is designed to be secured by two 1/4"-20 (M6) cap screws onto an optical table or breadboard, which allows the stage to be aligned with the table's or breadboard's hole pattern.

Vertical Stage Configuration
For situations where a vertically mounted rotation stage is needed, either the XRN-XZ or the XRN-YZ angle bracket (sold above) can be secured directly to the baseplate. This configuration is illustrated in the photo to the right and described in more detail in the Vertical Stage Assembly Kits section above.