Click to Enlarge
The Photon Detection Probability is shown here as a function of photon wavelength. The shaded region of this graph identifies the operating range of the detector.

Thorlabs' Single Photon Detectors, which use a silicon avalanche photodiode to detect single photons, are sensitive to photons emitted in the 350 to 900 nm range, with the maximum sensitivity around 500 nm (see the graph to the right). Incoming photons are counted by an internal 31-bit counter. In addition, an output SMA connection offers a signal that can be viewed on an oscilloscope or connected to an external counter. Please see the Tutorial tab for details about the functionality of this photon counter.

An integrated Peltier element stabilizes the diode's temperature below the ambient temperature to reduce the dark count rate. The two available models, SPCM20A and SPCM50A, have low typical dark count rates of 25 and 150 counts per second, respectively, which allows them to detect power levels down to 0.14 fW.

The active quenching circuit integrated into the diode of the single photon detector enables high count rates. Its high speed allows users to count a photon every 35 - 45 ns, depending on the model chosen. The SPCM20A provides an active area of Ø20 µm while the SPCM50A offers Ø50 µm.

The Single Photon Counter Module includes a software package with GUI for out-of-the-box operation. The following operating modes can be set by the software:

Avalanche photodiodes operated in the Geiger Mode have the ability to detect single photons. This single photon sensitivity can be achieved by biasing the APD above the breakdown voltage (Point A in Fig. 1). The APD will remain in a metastable state until a photon arrives and generates an avalanche (Point B). This avalanche is quenched by an active quenching circuit inside the APD (Point C), which lowers the bias voltage below the breakdown voltage (labeled VBR in Fig. 1). 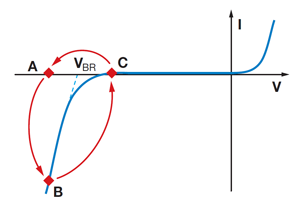 Afterwards the excess bias voltage can be restored. During this time, which is known as the pulse dead time of the diode, the APD is insensitive to any other incoming photons. Spontaneously triggered avalanches are possible while the diode is in a metastable state. If these spontaneous avalanches occur randomly, they are called dark counts. If the spontaneously triggered avalanches are correlated in time with a pulse caused by a photon, it is called an afterpulse. To block such afterpulses in the measurement, an additional pulse dead time can be set in the software, which will cause the internal counter of the single photon detector to ignore all pulses occurring during this pulse dead time. 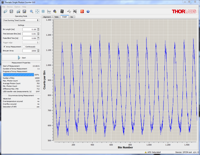 The Single Photon Detector includes a software package with GUI for out-of-the-box operation. The following operating modes can be set by the software: