Thorlabs’ LK220 Thermoelectric Liquid Chiller is an air-cooled liquid chiller that provides up to 200 Watts of cooling, 1.2 bar (17.4 psi) of pumping capability, and ±0.1 °C temperature stability, making it an ideal benchtop solution for heat dissipation. Based on thermoelectric cooler elements (TECs), this chiller can operate at low noise levels while also achieving high temperature accuracies of 0.01 °C. For more information about the cooling capacity and flow performance, please see the Graphs tab.

A removable dust filter is installed behind the chiller's font panel to support use in industrial environments. To reach the specified 200 W cooling power of the unit (see Key Specifications table), the dust filter must be removed. This can be done by unscrewing the four M3 cap screws with a 2 mm (5/64") ball driver or hex key. Please note that we only recommend long-term use of the LK220 without the dust filter in standard photonics lab environments and cleanrooms.

Quick Connections and Tubing
For easy tube connection, the LK220 chiller features two valved CPC® thumb latch quick-disconnect to ferruleless compression fittings, which accept semi-rigid plastic tubing with a 0.17" (4.3 mm) inner diameter and a 1/4" (6.4 mm) outer diameter. The image to the right shows the connectors with tubing attached to the coolant in and out ports on the back panel of the LK220 chiller. For convenience, these connectors audibly click when properly connected and include a valve to reduce leaks. Each unit comes with five meters of polyurethane hose.

Click to Enlarge
The coolant reservoir is easily accessible by opening the hinged lid and removing the plastic cap.

Coolant Reservoir
The 400 mL coolant reservoir can be easily accessed by opening the hinged lid at the top of the device and removing the plastic cap, as shown in the image to the left. For your convenience, both a funnel and siphon are included with the unit to simplify filling the reservoir, and a warning alarm will sound if the coolant level is too low.

Thorlabs’ thermoelectric liquid chiller is compatible with most ethylene glycol-based coolants, but we recommend using our CDTX Coolflow DTX refrigerant antifreeze with corrosion inhibitors (not included) for best performance. Please note that water can be used as coolant, but will result in reduced performance, and alcohol-based coolants cannot be used with this chiller. For more information on how various coolants affect the LK220 chiller's cooling capabilities, see the Graphs tab.

Operation
The LK220 liquid chiller can be controlled locally through the front panel, where the knob is used to make setting adjustments. The unit can also be controlled remotely, either through the included software GUI (see the Software tab for details) or the analog and trigger inputs. The analog input can be used to set the target temperature, with 0 to 5 V corresponding to temperatures from -5 to 45 °C. The trigger input enables the temperature control function, where off and on are 0 V and 5 V, respectively. Performance can be easily monitored by the adjustable knob on the front panel, which features a ring-shaped LED indicator that appears blue, green, yellow, or red depending on the operation status. For additional safety, the LK200 chiller includes a BNC interlock to disable connected equipment in the case of operational errors.

A monitor out port (BNC) is included on the front panel to indicate the actual temperature measured by the chiller, and it outputs a 0 to 5 V range that corresponds to -5 to 45 °C. To measure the outlet coolant temperature, the LK220 liquid chiller is equipped with an internal thermistor sensor inside the return coolant hose. An external thermistor, such as the Thorlabs TSP-TH temperature probe, can be connected to the chiller using the 2.5 mm stereo jack and used to provide temperature readings for the control feedback loop. Alternatively, a third party thermistor with 10 kΩ resistance at 25 °C can be used if the beta constant is set using the software.

†CPC® is a registered trademark of Colder Products Company.

This data reflects the typical performance of Thorlabs' LK220 thermoelectric liquid chiller, and is presented for reference only. The guaranteed specifications are shown in the Specs tab, however, performance may vary from unit to unit.

Click to Enlarge
Click for Raw Data
Cooling capacity indicates the maximum heat load that the LK220 chiller can dissipate. Please note that ΔT is the temperature difference between the coolant and the ambient temperature, which was 25 °C for the dust filter off and 20 °C for the dust filter on. Measurements were taken at 60% pumping power with CDTX Coolflow DTX refrigerant antifreeze.

Click to Enlarge
Click for Raw Data
Flow performance demonstrates the pumping capability of the LK220 chiller running at 50%, 80% and 100% pump power, and process flow is measured in Litres per Minute (LPM). Measurements are taken at 25 °C ambient temperature with water used as coolant. Note that the kinematic viscosity of CDTX Coolflow DTX is approximately twice that of water and will result in less than half the flow performance.

Thorlabs' LK220 thermoelectric liquid chiller can be used with most ethylene glycol-based antifreezes or coolants. The performance plots below show the LK220 cooling capacity when used with select coolants. Please note that using water for coolant will result in reduced performance and that alcohol-based coolants cannot be used with this chiller. 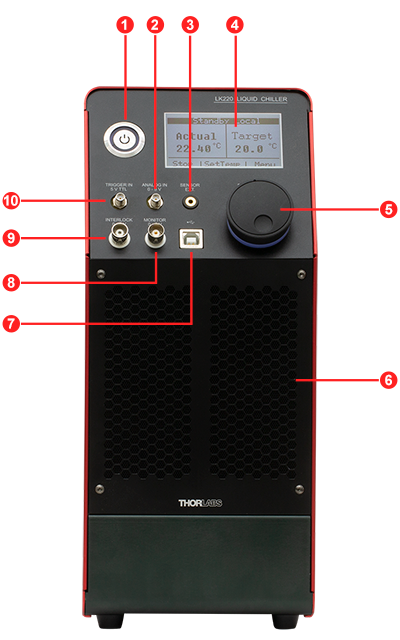 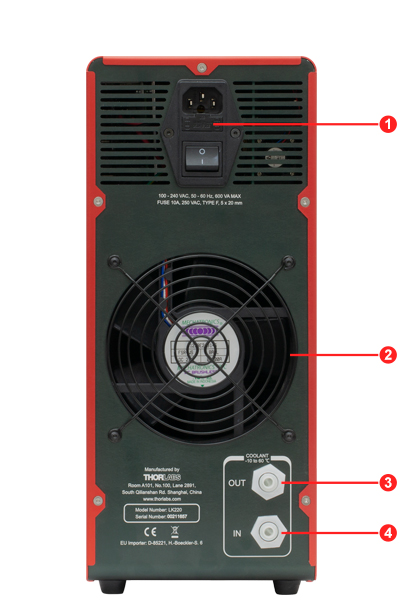 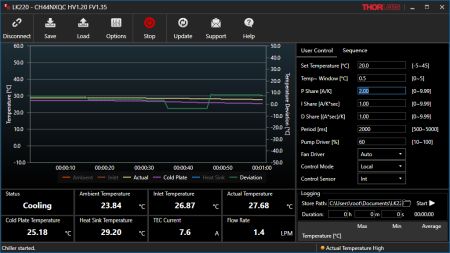 Includes a GUI for control of Thorlabs' Thermoelectric Liquid Chiller (LK220), as well as the required device drivers and LabVIEW/C++/Python SDK for secondary development. To download, click the button below.

GUI Interface
The software package allows for remote control of the LK220 Thermoelectric Liquid Chiller. The user-friendly interface includes readouts for the flow rate, TEC current, device status, and device temperatures. The featured temperature readouts are for the ambient, inlet, actual (coolant), cold plate, and heat sink temperatures. To monitor cooling performance as the chiller runs, these temperatures are also displayed graphically in a time trace. Temperature deviation, which is the difference between the actual and ambient temperatures, is also included in the time trace. This information can be recorded and saved over a set time duration.

The GUI features a User Control section, which allows the user to input the target temperature, temperature window, PID settings, and pump drive power. Control modes and sensor settings can also be toggled from this screen, rather than the device front panel. Temperature sequences can also be set through the GUI. 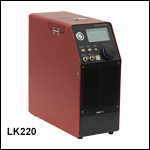 Click to Enlarge
Cooling capacity for the LK220 with and without the dust filter on. Additional performance graphs and raw data are available in the Graphs tab.

Thorlabs’ LK220 Thermoelectric Liquid Chiller is an air-cooled liquid chiller that provides up to 200 Watts of cooling, 1.2 bar (17.4 psi) of pumping capability, and ±0.1 °C temperature stability. 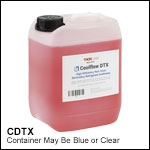 Thorlabs offers non-toxic Coolflow DTX Refrigerant Antifreeze with Corrosion, Scale, and Biological Inhibitors for use with chillers including the LK220 thermoelectric liquid chiller. Made with ethylene glycol, this pre-diluted coolant features more efficient heat transfer characteristics than alternatives based on propylene glycol, such as lower dynamic viscosity and higher thermal conductivity; see the Specifications table for more details. Though ethylene glycol is usually toxic, Coolflow DTX contains the additive DeTox®†, which makes the solution non-harmful to humans and animals if accidentally ingested. More information regarding material safety can be found in the MSDS sheet here.

†DeTox® is a registered trademark of Evans Cooling Systems, Inc.