A hyperhemispherical lens forms an image on a virtual plane behind the sensor element, resulting in an effective optical area greater than the physical sensor area.

A standard hemispherical immersion lens forms an image in the plane of the sensor element.

These photodiodes operate in photovoltaic mode and provide coverage for Mid-IR wavelengths through 10.6 µm. The detectors are optimized for best performance at a specific wavelength (5.0 µm, 8.0 µm, or 10.6 µm). Each HgCdTe (MCT) sensor element is integrated with a hyperhemispherical GaAs lens to achieve optical immersion, and each detector is provided with a wedged ZnSe window that is AR-coated for the 2 - 13 µm wavelength range. Our 8.0 µm and 10.6 µm detectors are also available with integrated four-stage thermoelectric coolers (TECs) to maintain the detector elements at -78 °C, as cooling improves detector current responsivity and therefore detectivity. Our MCT detectors with and without TEC are offered in TO-8 or TO-39 packages, respectively. We also incorporate the VML8T0 and VML10T0 detectors in our PDAVJ Series Amplified Photodetectors.

Each detector includes a printed test report including measured responsivity and detectivity plots, as well as other electrical characteristics. Click here for a sample test report.

Detectors with TECs
The VML8T4 and VML10T4 detectors feature integrated four-stage TECs, which enable their operating temperatures of -78 °C. Cooling to this temperature results in an order of magnitude increase in detectivity as a result of improved current responsivity. For more details, refer to the TE Cooling tab and Pin Diagrams tabs above. We recommend using our TED4015 Temperature Controller to regulate the detector temperature.

Click for Details
The heat sink should not predominantly contact the mounting screw or the cylindrical housing.

Click for Details
The heat sink must adequately contact the base of the detector package using thermal grease or heat conductive epoxy.

Heat Sink Placement
The four-stage thermoelectric (TEC) cooler integrated into the VML8T4 and VML10T4 detectors transfers heat from the sensor chip to the underside of the detector package. To help dissipate this heat, a heat sink should be firmly in contact with a large portion of the bottom, as illustrated in the first two diagrams to the right. Thermal grease or heat conductive epoxy should be used between the detector housing and the heat sink to maximize heat transfer.

Temperature Control
The TEC maintains the operating temperature by operating in closed loop mode, in which the integrated NTC thermistor (Murata, NCP03XM222E05RL) provides temperature feedback. We recommend using our TED4015 Temperature Controller to maintain a detector temperature of -78 °C. The temperature probe type should be set to NTC thermistor, with calibration values T0 = 25 °C, R0 = 2.2 kΩ, and β = 3080 K (approximate value at 25/-78 °C). These values can be used to correlate the thermistor's resistance with the MCT diode temperature using the β-parameter equation below, or the graph and raw data below and to the right.

Both views shown below are looking at the connector from the bottom side.

A junction photodiode is an intrinsic device that behaves similarly to an ordinary signal diode, but it generates a photocurrent when light is absorbed in the depleted region of the junction semiconductor. A photodiode is a fast, highly linear device that exhibits high quantum efficiency and may be used in a variety of different applications.

It is necessary to be able to correctly determine the level of the output current to expect and the responsivity based upon the incident light. Depicted in Figure 1 is a junction photodiode model with basic discrete components to help visualize the main characteristics and gain a better understanding of the operation of Thorlabs' photodiodes.

Responsivity
The responsivity of a photodiode can be defined as a ratio of generated photocurrent (IPD) to the incident light power (P) at a given wavelength:

Modes of Operation (Photoconductive vs. Photovoltaic)
A photodiode can be operated in one of two modes: photoconductive (reverse bias) or photovoltaic (zero-bias). Mode selection depends upon the application's speed requirements and the amount of tolerable dark current (leakage current).

Photoconductive
In photoconductive mode, an external reverse bias is applied, which is the basis for our DET series detectors. The current measured through the circuit indicates illumination of the device; the measured output current is linearly proportional to the input optical power. Applying a reverse bias increases the width of the depletion junction producing an increased responsivity with a decrease in junction capacitance and produces a very linear response. Operating under these conditions does tend to produce a larger dark current, but this can be limited based upon the photodiode material. (Note: Our DET detectors are reverse biased and cannot be operated under a forward bias.)

Photovoltaic
In photovoltaic mode the photodiode is zero biased. The flow of current out of the device is restricted and a voltage builds up. This mode of operation exploits the photovoltaic effect, which is the basis for solar cells. The amount of dark current is kept at a minimum when operating in photovoltaic mode.

Junction Capacitance
Junction capacitance (Cj) is an important property of a photodiode as this can have a profound impact on the photodiode's bandwidth and response. It should be noted that larger diode areas encompass a greater junction volume with increased charge capacity. In a reverse bias application, the depletion width of the junction is increased, thus effectively reducing the junction capacitance and increasing the response speed.

Noise Equivalent Power
The noise equivalent power (NEP) is the generated RMS signal voltage generated when the signal to noise ratio is equal to one. This is useful, as the NEP determines the ability of the detector to detect low level light. In general, the NEP increases with the active area of the detector and is given by the following equation:

Here, S/N is the Signal to Noise Ratio, Δf is the Noise Bandwidth, and Incident Energy has units of W/cm2. For more information on NEP, please see Thorlabs' Noise Equivalent Power White Paper.

Terminating Resistance
A load resistance is used to convert the generated photocurrent into a voltage (VOUT) for viewing on an oscilloscope:

Depending on the type of the photodiode, load resistance can affect the response speed. For maximum bandwidth, we recommend using a 50 Ω coaxial cable with a 50 Ω terminating resistor at the opposite end of the cable. This will minimize ringing by matching the cable with its characteristic impedance. If bandwidth is not important, you may increase the amount of voltage for a given light level by increasing RLOAD. In an unmatched termination, the length of the coaxial cable can have a profound impact on the response, so it is recommended to keep the cable as short as possible.

The DET series detectors are modeled with the circuit depicted above. The detector is reverse biased to produce a linear response to the applied input light. The amount of photocurrent generated is based upon the incident light and wavelength and can be viewed on an oscilloscope by attaching a load resistance on the output. The function of the RC filter is to filter any high-frequency noise from the input supply that may contribute to a noisy output.

One can also use a photodetector with an amplifier for the purpose of achieving high gain. The user can choose whether to operate in Photovoltaic of Photoconductive modes. There are a few benefits of choosing this active circuit:

where GBP is the amplifier gain bandwidth product and CD is the sum of the junction capacitance and amplifier capacitance.

The photoconductor signal will remain constant up to the time constant response limit. Many detectors, including PbS, PbSe, HgCdTe (MCT), and InAsSb, have a typical 1/f noise spectrum (i.e., the noise decreases as chopping frequency increases), which has a profound impact on the time constant at lower frequencies.

The detector will exhibit lower responsivity at lower chopping frequencies. Frequency response and detectivity are maximized for 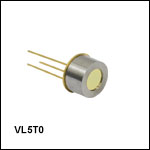 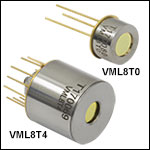 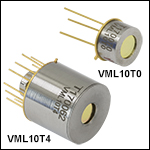