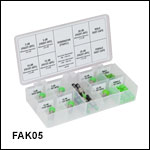 Thorlabs' Fiber Optic Attenuator and Terminator Kits each contain six fixed attenuators, five terminators, and a selection of dust caps. Components in the FAK03 kit have FC/PC connectors while those in the FAK05 kit have FC/APC connectors. Each kit is packaged in a plastic box measuring 7.0" x 3.5" x 1.25" (177.8 mm x 88.9 mm x 31.8 mm) and has nine labeled compartments. The label on the lid indicates the contents, associated Thorlabs item number (where applicable), attenuation value and tolerance for the attenuators, and wavelength range and return loss for the terminators. The table to the right lists the description and quantity of each item included in these kits.