The center wavelength of a BOA can be readily tailored for specific applications. It is quite common to adjust the BOA wavelength spectrum to match the specific laser source. Please contact us if you have custom wavelength requirements for pilot-projects or OEM applications.

When current is applied across the ridge waveguide, excited state electrons are stimulated by input light, leading to photon replication and signal gain.

Booster Optical Amplifiers (BOAs) are single-pass, traveling-wave amplifiers that perform well with both monochromatic and multi-wavelength signals. Since BOAs only amplify one state of polarization, they are best suited for applications where the input polarization of the light is known. This BOA consists of a highly efficient GaAs Quantum Well (QW) layer structure, which is designed for amplifying polarized optical signals around 785 nm and is also an ideal gain medium for implementing wide-bandwidth tunable lasers.

As seen in the schematic to the right, the input and output of the amplifier are coupled to the active layer of the ridge waveguide on the optical amplifier chip. The device is contained in a standard 14-pin butterfly package, with either single mode or polarization-maintaining fiber pigtails that are terminated with FC/APC connectors. The BOA785S uses single-mode, non-polarization-maintaining 780HP fiber. An integrated thermoelectric cooler (TEC) and thermistor allow this BOA to be temperature controlled, thus stabilizing the gain and the spectrum.

For additional details concerning the construction and operating parameters of our BOAs, please see the Optical Amplifiers tab.

ASE Center Wavelength
The center wavelength (CWL) of the amplified spontaneous emission (ASE) spectrum in broadband semiconductor devices, such as optical amplifiers, may show variation between lots. Please refer to the blue icons (

) below for the CWL tolerances of each particular model. For applications in which a specific ASE center wavelength is a critical concern, please contact Tech Support for information on the CWL of currently available lots. 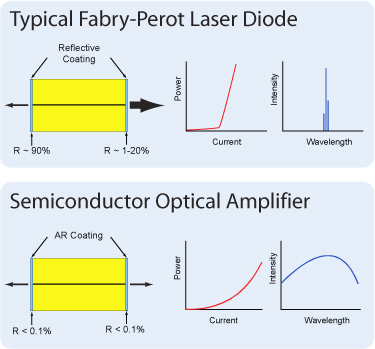 Booster optical amplifiers (BOAs) and semiconductor optical amplifiers (SOAs) are single-pass, traveling-wave amplifiers that perform well with both monochromatic and multi-wavelength signals. Since BOAs only amplify one state of polarization, they are best suited for applications where the input polarization of the light is known. For applications where the input polarization is unknown or fluctuates, a Semiconductor Optical Amplifier (SOA) is required. However, the gain, noise, bandwidth, and saturation power specifications of a BOA are superior to that of a SOA because of the design features that make the SOA polarization insensitive.