Benchtop SLD for the IR

An illustration of the difference in the intensity noise floor between our standard FP laser sources with TEC (Item # S3FC520 shown) and our high-power FP laser sources with TEC (Item # S4FC660 shown). The noise signal from the S4FC660 shows a considerable reduction in the peak-to-peak noise amplitude, as well as suppression of high frequency components that are seen in the noise signal of the S3FC520. The S3FC520 plot is vertically offset in order to better compare the two signals. Note that the curves shown are without mode-hopping, which will occur despite temperature or current adjustment. 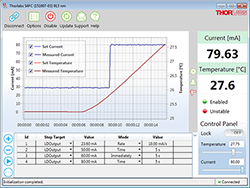 For both the S4FC series and S6FC2000 laser sources, the laser diode is pigtailed to a single mode fiber. In the S4FC series sources, the fiber is terminated at an FC/PC bulkhead connector (wide and narrow key compatible). In the S6FC2000 source, the fiber is terminated at an FC/APC fiber connector (wide and narrow key compatible). The S6FC2000 features an angled fiber ferrule at the internal laser/fiber launch point to minimize reflections back into the laser diode, thereby increasing the stability of the laser diode's output. To minimize losses, we recommend using a fiber patch cable that is the same fiber type as the fiber-pigtailed laser.

These laser sources operate via constant current. The power is displayed on the S4FC sources, whereas the current is displayed on the S6FC2000 source. Also on the display panel is the temperature in °C, an on/off key, an enable button, a knob to adjust either the laser power (S4FC series) or the laser current (S6FC2000), and a trimpot to adjust the temperature (TEC current).

The back panel includes a BNC input that allows the laser diode drive current to be controlled via an external voltage source (0 - 5 V) and a remote interlock input. This input enables intensity modulation of the laser source. Using a sine wave, the output can obtain full-depth modulation at frequencies up to 100 kHz. A USB connector on the back panel enables computer communication. The included GUI provides control and readout of the laser's output power and setpoints (see Software tab). The back panel also features a remote interlock input (2.5 mm mono jack) for added safety.

Note that the fiber bulkhead and patch cable ferrule must be cleaned prior to connecting a patch cable. For instructions, please refer to the operating manual. The laser must be off when connecting or disconnecting fibers from the device, particularly for power levels above 10 mW. For applications that require several laser sources, consider the temperature-stabilized four-channel fiber coupled laser source.

The stability data below was obtained using an S4FC660 Laser Source. The performance is representative of both our S4FC sources and our S6FC2000 source.

Click to Enlarge
A demonstration of the long-term stability of the S4FC660 Laser source, shown over the course of 25 hours. The device is capable of maintaining a constant laser diode temperature, and thus constant output power, over long periods of operation. To obtain the detector signal, the S4FC660 output power was set to 75% of maximum and passed through ND filters reducing the power to 1 mW. The resultant beam was directed into a DET100A (previous generation) detector which was then connected to an oscilloscope via a T-adapter and high-impedance terminator.

Click to Enlarge
The graph above demonstrates the ability of the S4FC660 to maintain steady temperature regulation even with large changes in the environmental temperature. Even when the environment changes by 20 °C, the S4FC660 is able to maintain a steady and regulated temperature of the laser diode, yielding a consistent power output. To obtain the detector signal, the S4FC660 output power was set to 75% of maximum and passed through ND filters reducing the power to 1 mW. The resultant beam was directed into a DET100A (previous generation) detector which was then connected to an oscilloscope via a T-adapter and high-impedance terminator.

Terminals must be shorted either by included plug or user device, i.e. external switch, for laser mode "ON" to be enabled.

Includes a GUI for control of Thorlabs S4FC Benchtop Laser Sources. To download, click the button below.

Includes a GUI for control of Thorlabs S6FC2000 Benchtop Laser Source. To download, click the button below.

GUI Interface
Each software package allows the user to control settings and display features of the benchtop laser source. The settings tab enables several helpful features for controlling the device, including setting an output limit, starting the device from the last setting (instead of at 0 mW or threshold power), adjusting the device by current, dimming the display intensity, or enabling the temperature LED to blink when the device is not at its temperature setpoint (making it visually easier to observe when the laser is not at thermal equilibrium). 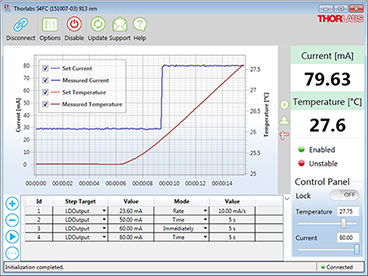 Click to Enlarge
The control panel of the software when the laser source is connected. An example of the S4FC series GUI is shown.

Click to Enlarge
The Controls tab of the software when the laser source is connected and the laser not yet enabled. An example of the S6FC2000 GUI is shown.