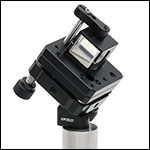 Our Angle Blocks can be used to orient mirror mounts and other optomechanics at several fixed angles from 4° to 54.7°. They are available with either an 8-32 (M4) tap on top or a #8 (M4) counterbore on top. The bottom of the angle block has an 8-32 (M4) tapped hole for our Ø1/2" and Ø1" (Ø25 mm) posts. They are manufactured from black-anodized aluminum and are engraved with the part number for easy identification of the angle.

Additionally, Thorlabs offers an adjustable flip platform with tick marks engraved in 15° increments which can be used to hold components fixed at various angles.

Application Note: The Magic Angle
Our 35.3° and 54.7° angle blocks are designed to help orient polarizers in rectangular housings, such as Glan-Laser polarizers, at the magic angle used in certain ultrafast pump-probe measurements. In this family of experiments, which includes fluorescence lifetime measurements, transient absorption spectroscopy, and vibrational spectroscopy, it is advantageous to polarize the probe beam at the magic angle of 54.7° (relative to the pump beam's polarization). This angle makes the probe beam insensitive to unwanted anisotropies that would otherwise be convolved with the measured signal.

When using Thorlabs' Glan-Laser polarizers, we recommend securing the polarizer to a Kinematic Platform Mount, as shown in the photo to the right. The kinematic mount enables fine angle tuning and leaves a large clear edge around the polarizer, making it easier to maintain overlap of the pump and probe beams through the sample. In the photo, a 35.3° angle block is used, which requires the pump beam to be vertically polarized; this configuration allows the clamping arm to avoid touching the sides of the housing that have escape windows. 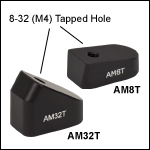 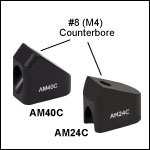 These Angle Blocks contain a #8 (M4) counterbore that is designed to mate with optomechanical components that have a tapped mounting hole, such as our KM05(/M) Ø1/2" Kinematic Mirror Mount and Fixed Lens Mounts. The bottom of the angle block has an 8-32 (M4) tapped hole for post mounting.