Actual Size Compared
to US One Cent Coin

Chip on Submount
with Heatsink

Single Angled Facet (SAF) gain chips use a geometric technique to further reduce the reflection on one end of the chip by curving the ridge waveguide so that it is not normally incident to the chip facet. This, in combination with an AR coating on that facet, virtually eliminates back reflections that can create unwanted feedback into the laser cavity. As a result, SAF gain chips are superior to standard gain chips when used in Extended Cavity Lasers (ECLs), particularly tunable ECLs, since any residual reflection from the AR-coated Fabry-Perot (FP) gain chip facet often limits the stability, output power, and spectral quality of the laser.

Our 1320 nm SAF gain chip is available in two configurations. The SAF1144C chip is offered on a submount, while the SAF1144H is provided on the same submount with a heatsink and connected cathode and anode leads.

For more information on using a SAF gain chip in an external cavity laser, see the ECL Tutorial tab. 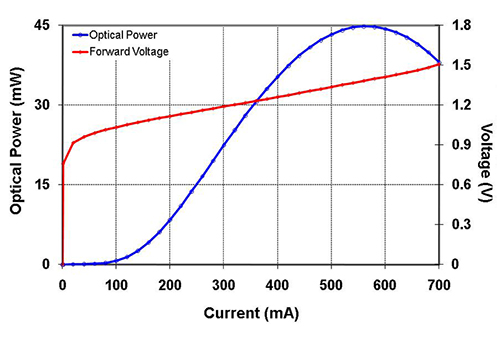 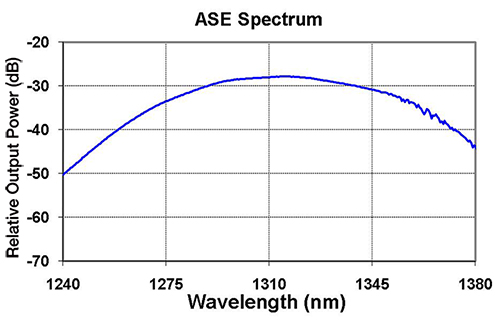 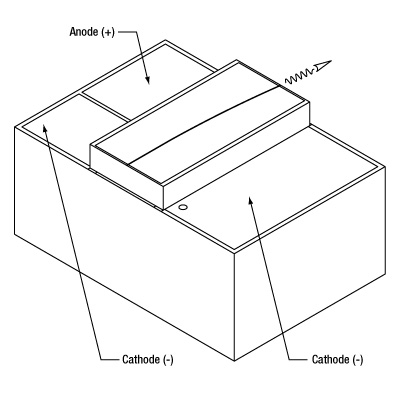 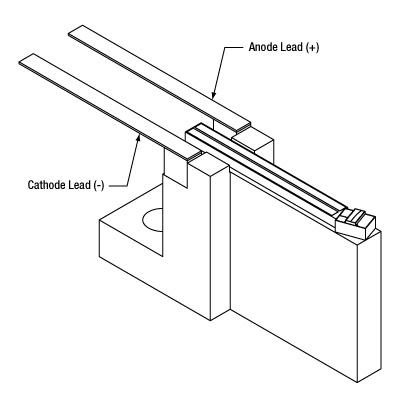 Two elements are required for a laser to operate: (1) an active gain medium that amplifies the optical signal and (2) a feedback mechanism to provide sustained laser oscillation. In a Fabry-Perot laser, two mirrors, having reflection coefficients of r1 and r2 (power reflectance R1 = r12 and R2 = r22), respectively, provide feedback for the optical field, as shown in Figure 1.

The round-trip gain for the optical field within a cavity of length L can be expressed as:

where g and αi are the gain and internal loss coefficients, respectively, λ is the vacuum wavelength, neff is the effective refractive index, and L is the cavity length. Solving for unity results in the threshold amplitude and phase conditions:

where αm is defined as the mirror loss and N is a running integer index representing the mode number.

In a semiconductor (diode) laser, the gain medium is excited by injecting a current into the junction region of a forward-biased diode. The high concentration of electrons and holes in the engineered quantum-well junction of a semiconductor laser makes it possible to create the population inversion required for optical gain.

When the gain medium is a semiconductor material, a Fabry-Perot cavity can be created by the Fresnel optical reflections at the cleaved facets of the chip. The junction is effectively a waveguide that extends from one facet to the other. An uncoated "as-cleaved" facet perpendicular to the waveguide has a reflectivity of R ~ 30%. However, the maximum output power of the device can be optimized by modifying the reflectance of the facets with optical coatings. Maximum power for a Fabry-Perot laser diode is typically achieved with a high-reflectivity (HR) coating on the back facet and a low-reflectivity (LR) coating on the front facet.

The emission spectrum of the Fabry-Perot laser diode device will be dependent on the injection current. When biased below threshold with g > αi , the emission spectrum consists of a broad series of peaks corresponding to the longitudinal modes of the Fabry-Perot cavity defined by the phase equation. Lasing does not occur until the injection current is increased to the point where g = αi + αm. The lasing wavelength is determined by the longitudinal mode that first achieves the threshold condition. The output spectrum does not always collapse into a single lasing wavelength but can consist of a narrow spectrum of longitudinal modes.

A typical 850 nm laser diode with a length of around 300 µm and a group index around 4 will have a longitudinal mode spacing of 0.3 nm, which is similar to a 1 mm long 1550 nm laser diode. Changing the length or refractive index of the cavity, for example by heating or cooling the laser diode, will shift the whole comb of modes and consequently the output wavelength.

The linewidth of a semiconductor laser single longitudinal lasing mode (FWHM) is given by the modified Schawlow and Townes formula that incorporates the Henry linewidth enhancement factor αH [1]:

where hv is the photon energy, vg is the group velocity, nsp is the population inversion factor, and Pout is the single-facet output power. This equation describes the spectral broadening of the laser linewidth due to phase and amplitude fluctuations caused by the unavoidable addition of spontaneous emission photons to the coherent lasing mode. These so-called quantum noise fluctuations define a lower limit on the laser linewidth, which may be masked by larger noise fluctuations caused by mechanical/acoustic vibration or thermal variation.

Extending the length of the cavity will decrease αm (see Eq. 2), which reduces the linewidth. This can be understood by viewing the quantum noise-limited linewidth (see Eq. 4) as being proportional to the ratio of the number of spontaneous emission photons in the lasing mode. Increasing the cavity length both reduces the number of spontaneous emission photons (by decreasing the "cold-cavity" spectral width of each longitudinal mode) and increases the total number of photons in the cavity for a fixed output power. This is why the cavity length term appears twice in the Schallow-Townes equation.

A single-frequency distributed feedback (DFB) diode laser with cavity of 0.3 mm will typically have an emission linewidth on the order of 1 to 10 MHz. Increasing the length of the cavity to 3 cm, for example, will narrow the emission linewidth by a factor of more than 100. It has been shown [2] that the linewidth of the emission from an extended cavity semiconductor lasers can be reduced to <1 kHz.

For many applications, it is desirable to have a single longitudinal mode (single frequency) laser, to be able to adjust the lasing wavelength, or both. To accomplish this, a wavelength-selective feedback element external to the semiconductor laser chip can be used to select the lasing wavelength. Proper operation of this external cavity laser (ECL) requires suppression of the intrinsic optical feedback from the semiconductor chip Fabry-Perot cavity so that it does not interfere with the external feedback. The gain chip's Fabry-Perot cavity effect can be reduced by applying an antireflection (AR) optical coating to one chip facet.

Figure 3: External Cavity Operation Based on a Gain Chip

At a minimum, the chip facet reflectance (R1) should be 20 dB less than the external feedback (Rext); that is, R1 < 10-2 x Rext [3]. Even with the AR coating, the residual reflection from the AR-coated Fabry-Perot gain chip facet often limits the stability, output power, and spectral quality of the ECL, especially if the laser is tunable. To further reduce the reflection at the chip facet, the combination of an angled waveguide and an AR coating can be used to effectively remove most of the feedback from the internal chip Fabry-Perot cavity [4]. This single-angled-facet (SAF) gain chip provides a superior structure for ECLs, in particular broadband tunable ECLs.

Here, n is the order of diffraction, λ is the diffracted wavelength, and d is the grating constant (the distance between grooves). For n > 0, the diffraction grating will spatially separate a polychromatic incident beam by diffracting the beam at an angle θ', which is wavelength dependent. Once the spectral content of the gain chip is spatially separated, a variety of means can be employed to selectively reflect light with a specific wavelength back into the gain medium.

One of the simplest approaches is to use a Littrow configuration where the diffraction grating is oriented so that the first-order diffraction is retroreflected back into the gain chip [i.e., θ = θ' in Eq. (5) above]:

The laser output power can be taken from the zero-order reflection of the grating, which is often done because it minimizes the number of optical elements required to construct the ECL (a collimating lens and the diffraction grating).

Wavelength tuning is accomplished by rotating the diffraction grating, which varies the wavelength of light that is reflected back into the waveguide. When the diffraction grating (grating constant), collimation lens, and cavity length are chosen so that only one longitudinal mode is reflected back to the gain chip within the acceptance angle of the waveguide, the external cavity laser will produce a signle frequency laser spectrum. Note that the selection of collimation lens is important because it affects the amount of grating area that is illuminated as well as the focused spot size coupling back into the semiconductor gain chip. One of the disadvantages of this configuration is that the angle of the zero-order output beam changes as the wavelength is tuned. However, this problem can be avoided if the output of the ECL is emitted from the normal facet of the SAF gain chip. In this configuration, the reflectance of the SAF normal facet is typically reduced to R ~ 10% and a grating is chosen that efficiently diffracts light into the order being used to create the ECL to maximize the output power of the laser.

Another common ECL implementation is the Littman-Metcalf configuration, which uses an additional adjustable mirror to select the feedback wavelength [5]. The double-pass of the diffraction grating at an increased angle of incidence results in an external cavity that has better wavelength selectivity. As a result, the output beam of a Littman-Metcalf ECL typically as a narrower linewidth than a similar laser built using a Littrow configuration. In the Littman-Metcalf configuration, the output beam of the laser is typically the zero-order reflection from the diffraction grating, since the propagation direction remains fixed as the wavelength is tuned. In this case, the SAF normal facet is coated with a high-reflective (HR) coating, typically >90%, in order to minimize the losses in the ECL, which maximizes the output power.

One drawback to the Littman-Metcalf design is that the internal losses are higher than in the Littrow configuration, and hence, the output power of the laser is typically lower. The increase in internal losses are mainly due to the loss of the zero-order beam reflected from the tuning mirror and the increased loss due to the decrease in the efficiency of the grating when used to reflect light at a large angle of incidence.

The innovative design of an SAF gain chip is ideal for use in external cavity lasers because it virtually eliminates the unwanted feedback from the intracavity facet of the gain chip. Thorlabs offers SAF chips with both low- and high-reflectivity coatings on the normal facet in order to support a wide variety of external cavity configurations. For information on custom coatings that optimize the performance of a particular external cavity laser configuration, please contact Tech Support.