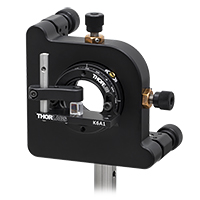 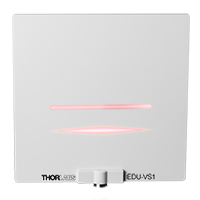 Powell Lenses, also known as laser line generating lenses, create straight, uniform laser lines by fanning out collimated beams in one dimension. The apex of each lens below features an acylindric curve that evenly redistributes the optical power of a Ø0.8 mm (1/e2), 633 nm gaussian input beam into a projected line with less than 30% intensity variation over the line's central 80% (see the Specs tab for typical performance graphs). This can be contrasted with standard cylindrical lenses, which produce diverging laser lines with Gaussian intensity profiles, as seen in the image to the right. Fan angles of 30°, 45°, 60°, or 75° are available.

To achieve the Ø0.8 mm 1/e2 input beam diameter using a fiber-coupled light source, we recommend our F230FC-B or F230SMA-B 633 nm fixed-focus collimation package. Inputs with other wavelengths or beam diameters may cause nominal variance in the performance of the lens.

Each laser line generator lens is produced from N-SF6 glass and has a square output face. Using a form factor based on a cube, rather than a cylinder, provides a reference surface when aligning the output laser line. An antireflection (AR) coating applied to the roof and square output face provides <2% average reflectance per surface from 400 nm to 700 nm.

Mounting Options
These lenses can be mounted in a variety of ways, depending on the accuracy required for the application. For situations that require a small footprint, the PCM post clamp mount can be used in conjunction with the PCMP flat base adapter to place the Powell lens on the end of a Ø1/2" optical post. The KM100C and KM100CL adjustable kinematic mounts can add tip-tilt actuation that assists in pointing the input beam directly at the center of the Powell lens. When using either the KM100C or KM100CL mounts, be sure to mount the lens such that the fan opens parallel to the mounting clamps to avoid beam clipping. For maximum directional control, the K6XS 6-axis locking kinematic mount can be used with a K6A1 prism mounting accessory, as shown above. With their small size and square cross-section, our Powell lenses are also suitable for glue-in-place OEM applications. For more information on the importance of proper alignment when using a Powell lens, see the Application tab. 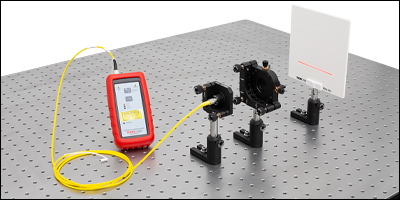 A Powell lens can be a fast and effective method to create a laser line with a flat-top profile, useful in applications such as machine vision and optical inspection. Each lens is designed for a Gaussian input beam with a specific 1/e2 diameter (0.8 mm for the lenses below). Overfilling the lens will cause the ends of the laser line to become more intense compared to the center. Conversely, underfilling the lens will cause the laser line to appear more Gaussian, with ends less intense than the laser line's center. Furthermore, the specified fan angle, uniformity, and straightness produced by the lenses below were tested at 633 nm (see the Specs tab for details) and may vary at other wavelengths.

Care must be taken to properly center and align the incident beam in order to achieve the specified performance. If the input beam is centered on the roof of the prism but off angle, the resulting projection will exhibit linear coma that results in more intensity on one side of the laser line than the other.

The image to the right shows an LGL145 Powel lens mounted on a K6XS 6-axis kinematic mount. The mount has been oriented to prevent clipping the 45° fanned beam. The input beam is generated by an HLS635 handheld laser source coupled to an F230FC-B fiber collimator through a P1-630AR-2 fiber patch cable. This collimates the 635 nm light to a Ø0.8 mm beam. The K6XS 6-axis kinematic mount allows of the Powell lens alignment to be adjusted so that the beam is centered on the lens' roof and perpendicular to the output face, resulting in a uniform, straight flat-top line.