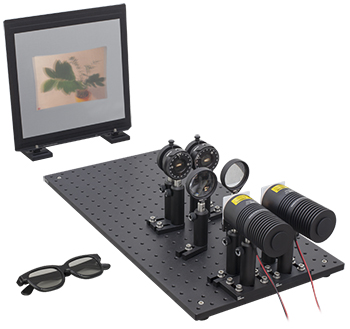 The Polarization and 3D Cinema Technology Kit allows students to build their own 3D projector. The version shown here uses circular polarization and a pair of RealD 3D glasses to produce the 3D effect.

Thorlabs' Polarization and 3D Cinema Technology Kit includes several experiments to help students explore the concept of polarization and some of its common uses. This educational lab kit contains components to build three setups for viewing 3D images, including RealD 3D glasses and a piece of real cinema screen. Additional experiments explore some uses of polarization in industry, including determining the concentration of sugar dissolved in a liquid and mapping mechanical stress in materials.

Although some of the experiments require the use of a voltmeter, we have not included one in this educational kit since many physics labs are already stocked with them. For customers who would like to purchase a voltmeter to use with the kit, Thorlabs has a digital multimeter available here.

Thorlabs' line of educational products aims to promote physics, optics, and photonics by covering many classic experiments, as well as emerging fields of research. Each educational kit includes all the necessary components and a manual that contains both detailed setup instructions and extensive teaching materials. These lab kits are being offered at the price of the included components, with the
educational materials offered for free. Technical support from our educational team is available both before and after purchase.

Purchasing Note: English and German language manuals/teaching information are available for this product. The imperial educational kit contains the English manual and US-style power cord. The appropriate manual and power cord will be included in the metric kit based on your shipping location. The power supplies and other electronic devices in both the metric and the imperial kit accept voltages of 230 VAC and 120 VAC. Some power supplies include a switch for selecting the mains voltage. See the respective manuals for details. Please contact Tech Support if you need a different language or cord style. As with all products on our website, taxes are not included in the price shown below. 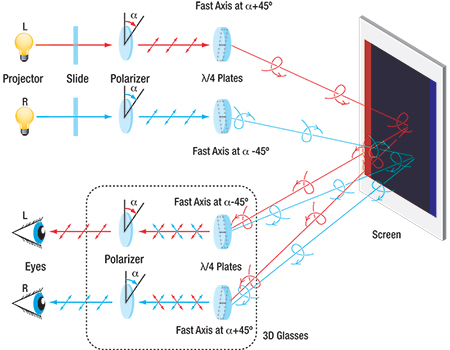 The Polarization and 3D Cinema Technology Kit includes components and instructions for building three 3D projection setups. The theory and tools to construct three other experiments that study the interaction of polarized light with optical elements such as wave plates and polarizers are also provided. Experiments include:

Details of some of these experiments can be found below and a complete list of included activities is available on the Exercise List tab.

Polarization is a fundamental property of light. Understanding the generation and measurement of polarization and its possible applications is a standard topic in high school and university physics classes. This kit provides several experiments based on real-world uses of polarization to explore fundamental concepts. In the saccharimetry experiment, students can measure how the angle of rotation of linearly polarized light is affected by an optically active sugar solution and use this knowledge to determine the sugar content of soft drinks.

The kit also examines the technology that has been developed to produce stereoscopic images and 3D movies, including red-cyan anaglyph images, linear polarization, and circularly polarized light. Mounted slides, several types of 3D glasses, and a piece of real cinema screen are provided so that students can build their own 3D projection setup.

All stereoscopic projection methods are based on the same principle: the observed 3D image is actually composed of two images of the same object which are recorded from slightly different angles. Due to the spacing between our eyes, our right eye will naturally perceive an object from a different angle than our left eye. Our brains use this information to percieve depth in the world around us. 3D imaging techniques reproduce this effect by allowing each of the observer's eyes to view only one of two offset projected images. This can be achieved by using a pair of glasses with filters in place of lenses to block the left image from reaching the right eye and vice versa. 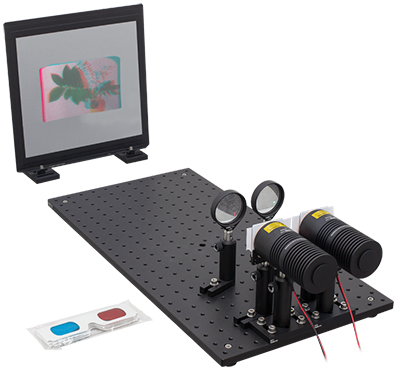 Today, 3D projection that uses circular polarization is found in many movie theaters in the form of the licensed RealD™ technology. Advantages of this method include the ability to produce true-color 3D images that are not susceptible to ghost images or other visual artifacts.

Thorlabs' Polarization and 3D Cinema Kit allows students to build 3D projectors that use each of the techniques mentioned above. First, students are introduced to the concepts of stereoscopic vision, the underlying principles of polarized light, and how each of the three 3D projection techniques works. To prepare students to apply the polarization-based 3D projection methods, a set of basic experiments on linear and circular polarization can be performed using the laser light source, polarizers, quarter-wave plates, and the three types of 3D glasses included with the kit.

Afterwards, they can use the kit to construct their own 3D projector. Advantages and disadvantages of each method can be worked out and experienced experimentally. In addition to red-cyan, linear polarizer, and RealD™ 3D glasses, a piece of silver-coated cinema screen allows students to produce high-quality 3D images.

Additional 3D Images can be downloaded from the 3D Image Gallery tab. The images can either be printed professionally at a specialty photo store or with any normal printer on transparencies (at a slightly lower quality). If you or your class have 3D images that you would like to share, submit your photos to us at techsupport@thorlabs.com and we'll consider them for addition to the image gallery.

Click to Enlarge
Students can build their own saccharimeter to determine the sugar concentration in popular soft drinks using a laser diode, polarizers, and photodetector.

When linearly polarized light is transmitted through an optically active sugar solution, the polarization vector is rotated by an angle that depends on the sugar concentration of the solution. Different types of sugars will also produce different characteristic angles of rotation. With the saccharimeter experiment included in this kit, students can measure the characteristic angle of rotation for cane sugar (sucrose) and use the results of their measurement to determine the sugar concentration of soft drinks. 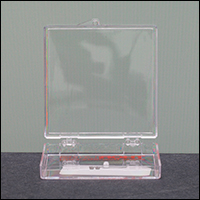 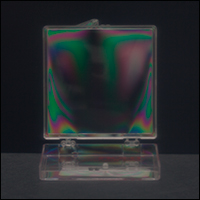 Click to Enlarge
Students can view the effects of stress-induced birefringence in an optics box by placing it in front of a computer screen (top) and then viewing it through a linear polarizer (bottom).

Exercise 1: Place the two polarizers in front of the laser and adjust them so that their transmission axes are perpendicular to each other. Now, hold a third polarizer (film without holder) between the two crossed polarizers and rotate it. What do you observe and why?

Exercise 3: Measure the polarization state of the laser.

Exercise 4: Determine the midpoint between the slow and the fast axis of a quarter-wave plate (i.e. orientation of the slow axis at a 45° angle to the vertical).

Exercise 6: If linearly polarized light passes through a sugar solution, then the angle through which the polarization is rotated is proportional to the concentration of the sugar solution and to the length of the light path through it. Determine the constant of proportionality.

Exercise 7: Determine the sugar content of a soft drink of your choice.

Exercise 8: There is now a "diet" or "zero" variant of many soft drinks. What do you expect for the rotation of polarization in this case?

Exercise 9: Use the plastic optics boxes and the polarizer to observe stress-induced birefringence.

Exercise 10: Examine other transparent objects/materials for stress-induced birefringence, such as bubble wrap (which changes when stressed) and glasses.

Exercise 11: Using a camera (not included), take photos of an object from two different perspectives to create an anaglyph image.

Exercise 12: Set up a red-cyan projection. Then learn for yourself that even a sheet of white paper can serve as a screen.

Exercise 13: Set up a 3D projection using linear polarizers. What are the problems of this method? What happens when an image is projected on white paper?

Exercise 14: Use a linearly polarized light source to explain how the 3D glasses are constructed.

Exercise 15: Put on the RealD glasses and stand in front of a mirror. Now close one eye. What do you observe and why?

Exercise 16: Determine the orientation of the polarizers in the glasses.

Exercise 17: Set up the 3D projection with the RealD method. Turn your head slightly and verify that the 3D effect is maintained.

Thorlabs includes two pairs of slides for projecting 3D images with each kit: a photo of a plant and a photo of stones. Additional images can be downloaded below. The images can either be printed professionally at a specialty photo store or with any normal printer on transparencies (at a slightly lower quality). If you would like to share your own 3D images, you can submit them to techsupport@thorlabs.com and we'll consider them for addition to the image gallery. 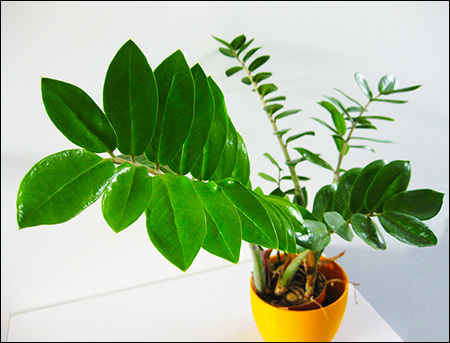 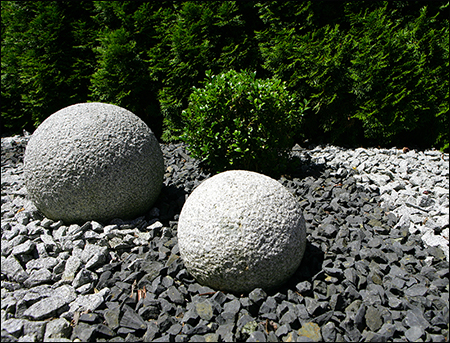 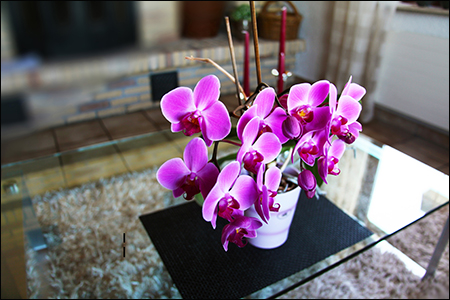 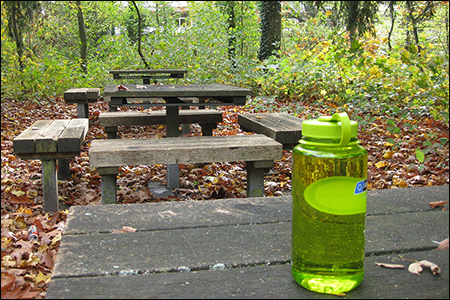 Have you or your class taken a 3D Image that you would like to share? If so, e-mail your photos to us at techsupport@thorlabs.com and we'll consider them for addition to the image gallery. 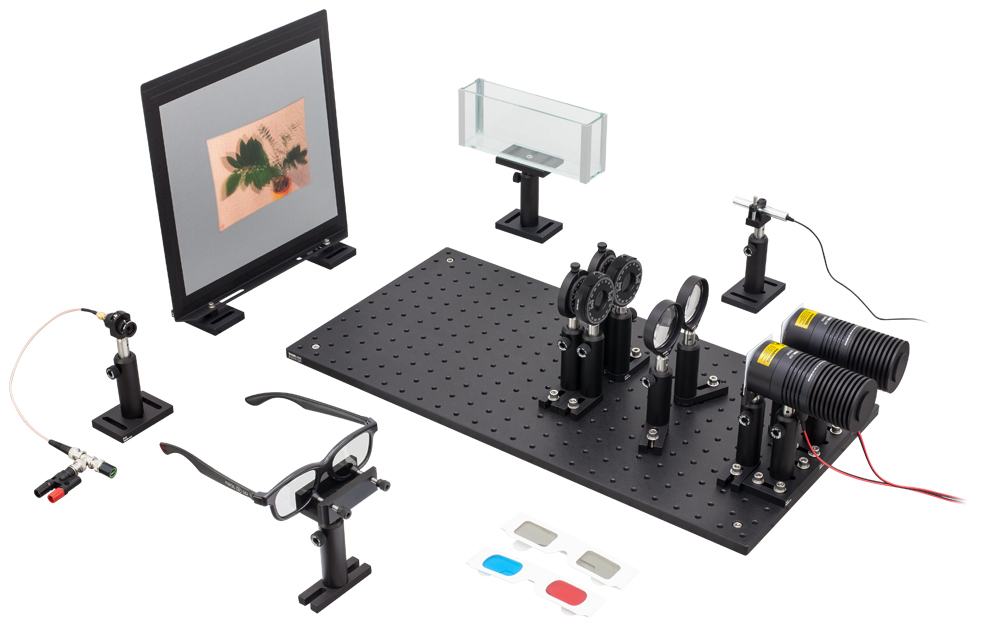 Thorlabs' Polarization and 3D Cinema Technology Kits are available in imperial and metric versions. In cases where the metric and imperial kits contain parts with different item numbers, metric part numbers and measurements are indicated by parentheses unless otherwise noted.

The EDU-3D1(/M) kit was awarded a certificate by the Association of Physics Undergraduate Laboratories (AGPP), a working group of the German Physical Society, for an innovative physical experiment developed and designed in a collaboration between a university and a commercial company. Click on the images below to view the English- or German-language versions of the award. 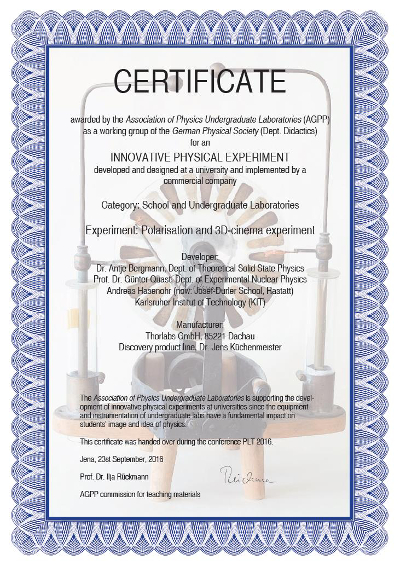 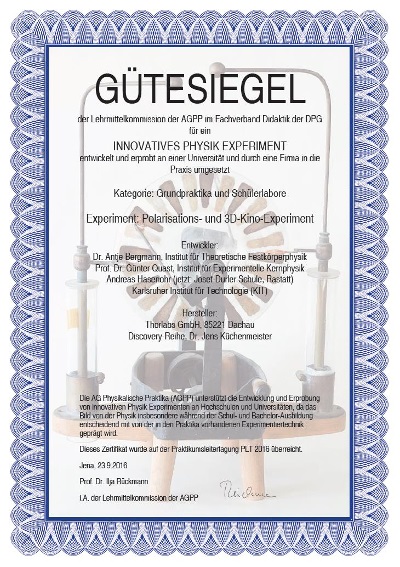 An early prototype of the EDU-3D1 was developed at the Karlsruhe Institute of Technology (KIT) by:

We cordially thank them for sharing their design and working with us on developing this kit.

Do you have ideas for an experiment that you would like to see implemented in an educational kit? Contact us at techsupport@thorlabs.com; we'd love to hear from you.