The table below gives an overview of the lenses offered by Thorlabs. More details can be found in the Spherical Singlets, Achromatic Lenses, Aspheric Lenses, and Lens Materials tabs on this page.

Spherical singlets are a good option for many situations where aberrations are not a great concern, as they are the simplest and most inexpensive type of lens to produce. For simple applications, standard plano-convex, plano-concave, bi-convex, and bi-concave lenses are sufficient. For better performance, best form lenses are optimized to reduce aberrations while still retaining spherical surfaces. The use of multiple lens elements within a compound optical system can lead to further performance improvements. Meniscus lenses are often employed in these multi-element optical systems, although they are rarely used alone. For the most demanding applications, spherical singlets will not perform as well as achromatic lenses (for both broadband and monochromatic sources) or aspheric lenses (for monochromatic sources). More details about these other types of lenses can be found on the Achromatic Lenses and Aspheric Lenses tabs.

Thorlabs offers several basic singlet designs: Plano-Convex, Bi-Convex, Plano-Concave, and Bi-Concave. Each of these lenses is suited for different applications. Plano-convex and bi-convex lenses are positive (i.e., they have a positive focal length) and will bring collimated light to a focus, while plano-concave and bi-concave lenses are negative and will cause collimated light to diverge. Each singlet lens shape minimizes aberrations for a certain conjugate ratio, defined as the ratio of the object distance to the image distance (these are called conjugate distances).

To minimize spherical aberration, a lens should be oriented so that the surface with the greatest curvature is facing the furthest conjugate point. For plano-convex and plano-concave lenses used at infinite conjugate ratios, this means that the curved surface should face the collimated beam (as shown in the drawings above). The f-number of a lens, defined as the focal length divided by the aperture diameter, has a significant impact on the magnitude of image aberrations. Lenses with a small f-number ("fast" lenses) introduce significantly more aberrations than lenses with a large f-number ("slow" lenses). Lens shape becomes important for f-numbers below about f/10, and alternatives to spherical singlets (such as achromatic lenses and aspheric lenses) should be considered for f-numbers below about f/2.

Best form lenses are designed to minimize spherical aberration and coma (an aberration introduced for light not on the optical axis) while still using spherical surfaces to form the lens. The use of a spherical design makes best form lenses easier to manufacture than aspheric lenses (described on the Aspheric Lenses tab), reducing costs. Each side of a best form lens is polished so that it has a different radius of curvature, providing the best possible performance for a spherical singlet. For small input beam diameters, best form lenses are even capable of diffraction limited performance. These lenses are commonly used in high-power applications where cemented achromatic lenses are not an option (see the Achromatic Lenses tab for more information).

Meniscus lenses are commonly used in multi-element optical systems to modify the focal length without introducing significant spherical aberration. The optical performance of multi-element lens systems is often significantly better than the performance of single lenses. In these systems, aberrations introduced by one element can be corrected by subsequent optics. These lenses have one convex and one concave surface, and they can be either positive or negative.

Figure 2 shows the performance gains that can be achieved by using multi-element lens systems. A single element plano-convex lens with a focal length of 100 mm produces a spot size of 240 µm (Figure 2a). In addition, the single lens introduces 2.2 mm of spherical aberration, defined as the distance betwen the marginal focus (where rays on the very edge of the lens focus) and the paraxial focus (where rays in the center of the lens focus). By combining two plano-convex lenses with focal lengths of 100 mm, for an effective focal length of 50 mm, the focused spot size is decreased to 81 µm and the spherical aberration is reduced to 0.8 mm (Figure 2b). An even better option, however, is to combine the f=100 mm plano-convex lens with a positive f=100 mm meniscus lens. Figure 2c shows the results: the focused spot size is reduced to 21 µm and the spherical aberration is reduced to 0.3 mm. Note that the convex surfaces of both lenses should be facing away from the image point.

Figure 1: Focusing White Light with a Plano-Convex and an Achromatic Doublet Lens

Achromatic lenses, or achromats, consist of two or three lens elements and offer significantly better performance than simple singlet lenses. The lenses in an achromatic doublet or triplet are either cemented together or have an air gap between them and typically include both positive and negative elements with different indices of refraction. This multi-element design offers a number of advantages, including reduced chromatic aberration, improved imaging of monochromatic light, and improved off-axis performance. The different kinds of achromatic lenses and their properties, such as conjugate ratio and damage threshold, are described at the bottom of this page. For any application with demanding imaging or laser beam manipulation needs, these achromats should be considered.

Since the index of refraction of a material depends upon the incident wavelength, the focal length of a single lens depends on the incident wavelength. This leads to a blurred focal spot when singlet lenses are used with a white light source. This phenomenon is known as chromatic aberration. An achromatic lens can partially compensate for chromatic aberration by virtue of its multi-element design.

The constituent optical elements of an achromatic lens generally include both positive and negative lenses with different amounts of dispersion. If the material dispersion values and focal lengths of these constituent lenses are chosen carefully, a partial cancellation of the chromatic aberration can be achieved. Typically, achromatic lenses are designed to have the same focal length for two wavelengths at opposite ends of the visible spectrum. This results in a nearly constant focal length across a wide range of wavelengths.

The use of achromats is beneficial for any broadband imaging application that utilizes a large wavelength range. Figure 1 shows the effect on focal length for a number of different wavelengths incident on both a plano-convex singlet and achromatic doublet. The diameter of the focal spot is reduced from 147 µm to 17 µm by replacing the singlet with the achromatic doublet.

Figure 2: Focusing a Monochromatic Beam with Both a Plano-Convex and Achromatic Doublet Lens

Figure 3: Off-Axis Performance for a Plano-Convex and an Achromatic Doublet Lens

For spherical singlets, the effect of off-axis aberrations can significantly compromise the performance of the lens if the beam is not propagating through the exact center of the lens. Achromatic lenses are less sensitive to centration, meaning that off-lens-axis beams are focused to almost the same spot as on-axis beams. Generally, achromatic triplets are even better than doublets at correcting for these off-axis effects.

Figure 3 shows two Ø25 mm, f=50.0 mm lenses, one of which is a plano-convex spherical singlet and the other is an achromatic doublet. Each lens has one beam propagating along the optical axis and another propagating parallel to the axis but offset by 8 mm. The achromatic doublet reduces both lateral and transverse aberrations; the lateral displacement of the focal points (circled in the diagram) is reduced by a factor of six and the focal spot diameter is also significantly smaller.

Achromatic triplets can be designed for both finite (Steinheil Triplet) and infinite (Hastings Triplet) conjugate ratios. These triplets consist of a low-index center element cemented between two identical high-index outer elements. They are capable of correcting both axial and laterial chromatic aberration, and their symmetric design provides enhanced performance relative to cemented doublets. 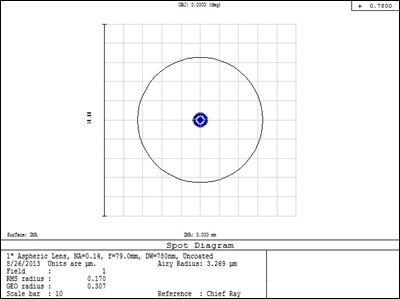 Figure 1 to the right shows ray tracing results for a 780 nm beam at the image plane of an ASL10142 lens (f = 79.0 mm at 780 nm). The Airy disk has a diameter of 6.538 µm, and is depicted by a black circle. Since all the rays (in blue) are well within the diameter, the theoretical spot size is diffraction limited.

Figure 2: Collimating a Laser Diode Output with an Aspheric Lens

When coupling light into a fiber, it is often necessary to focus a collimated beam of light to a diffraction-limited spot. Typically, single spherical elements and achromatic doublets are not capable of achieving such a small spot size; spherical aberration is the limiting factor rather than diffraction. Since aspheric lenses are designed to eliminate spherical aberration, only diffraction limits the size of the focal spot.

Many applications, such as microscopy, make use incoherent lamps and high-power LEDs as illumination sources. These applications benefit from the efficient collection of as much light as possible, suggesting the use of a large aperture lens to collimate the output of the source. Unfortunately, large aperture lenses tend to introduce more aberration than smaller lenses, reducing the quality of the resulting collimated light. Aspheric condenser lenses are ideal for efficient light collection, as they offer large diameters and numerical apertures as well as the reduced spherical aberration of an aspheric design.

Thorlabs' wide breadth of optics manufacturing capabilities allows us to offer lenses made from a variety of optical materials. The table below should aid with the selection of a lens best suited for use at a particular wavelength. To view transmission plots for the uncoated materials, please click on the appropriate icon below. For more details on optical substrates, please see our Optical Substrates tutorial.