The schematic above shows the internal structure of a double-clad fiber coupler. Single mode light input at Port A is used to illuminate a sample at Port S. Single mode and multimode light from the sample enters the single mode core (shown in red) and multimode inner cladding (shown in grey) of the DCF at Port S. The single mode signal travels through the core of the DCF and is output at port A; the multimode signal is transferred from the DCF to the multimode fiber and is output at Port B.

Thorlabs is collaborating with strategic partner Castor Optics to design and manufacture a family of Double-Clad Fiber Couplers. These 2x2 Double-Clad Fiber Couplers combine a double-clad fiber (single mode core surrounded by a multimode inner cladding) with a standard step-index multimode fiber, as shown in the illustration to the right. Light in the single mode core transmits with virtually no loss over the 430 - 680 nm, 680 - 980 nm, 960 - 1260 nm, or 1250 - 1550 nm wavelength range, depending upon the coupler. The multimode transfer, defined as the ratio of the output signal at Port B to the input signal at Port S, is ≥60% over a wider wavelength range of 400 - 1750 nm, excluding the water absorption region around 1383 nm. The diagram to the right depicts both single mode and multimode signals through a DCF coupler. Double-clad fiber couplers are well suited for applications at 530 nm, 780 nm, 1060 nm, or 1300 nm.

These optical properties allow double-clad fiber couplers to function as an alternative to free-space assemblies in many applications, including imaging and sensing. The video below to the right compares images obtained from the single mode and multimode outputs of a 1300 nm double-clad fiber coupler. These 1300 nm couplers with a Ø105 µm inner cladding have been used to combine OCT imaging with fluorescence detection, as well as in speckle-free single fiber endoscopy applications, and are appropriate for LIDAR applications due to their wavelength range extending to 1550 nm. Our 1060 nm couplers are useful for applications such as spectrally encoded scanning laser ophthalmoscope (SESLO) OCT, which enable applications such as non-invasive imaging of the human retina. Our 530 nm and 780 nm couplers feature a small inner cladding (Ø15 µm and Ø26 µm, respectively) that make them ideal for applications in confocal microscopy. Please see the Applications tab for more information.

The fiber in each leg is jacketed in a Ø900 µm Hytrel®* tube, color-coded white for the DCF legs (Port A and Port S) and orange for the MM fiber legs (Port B and Port R), as shown in the schematic to the right.

These couplers are housed inside of a protective tube and are available with either all four legs unterminated (780 nm and 1060 nm only) or with a mix of 2.0 mm narrow key FC/PC and FC/APC connectors. In general, FC/APC connectors reduce back reflections from the single mode core of the double-clad fiber leg of the coupler; reflection is not an issue for the multimode output port, so an FC/PC connector is used for easier integration with other fiber components. The DC530SEFA, DC780SEFA, and DC1060LEFA include an FC/PC connector on port R to allow for connection to a beam trap when used with a mating sleeve. Please refer to the diagrams in the tables below for specific connector configurations.

Custom connector configurations and different performance characteristics may be available. Additionally, the double-clad fiber used in the 1300 nm coupler is available from stock (Item # DCF13) and in a patch cable upon request; please contact info@castoroptics.com with all custom inquiries.

*Hytrel® is a registered trademark of DuPont Polymers, Inc.

Double-Clad Fiber Couplers can be implemented in many imaging, photonics, and LIDAR applications. The examples below specifically illustrate how DCFCs can be used in confocal microscopy, OCT, and endoscopy applications. 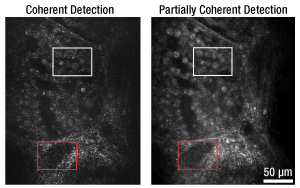 In a free-space confocal microscope, pinhole apertures only allow coherent light at the focal plane to reach the detector, which enables optical sectioning and high-resolution images over a narrow focal plane. Widening the detection aperture allows a small amount of partially coherent light to reach the detector, creating images with reduced speckle noise and increased contrast, but slightly reduced resolution.

This same effect can be achieved using a small-diameter DCFC, such as the DC780SEFA or DC780SEB. In this scenario, the single mode core acts as an illumination pinhole while the small inner cladding (Ø26 µm) serves the purpose of the detection pinhole. Together, the core and inner cladding enable optical sectioning of the image just as in free space confocal microscopy. Using a DCFC in this manner ensures that the pinholes are always conjugate, because the detection pinhole surrounds the illumination pinhole. Finally, because the inner cladding diameter is just slightly larger than the core diameter, a small amount of partially coherent light is accepted, which reduces speckle noise and increases contrast.

Figure 1 compares images taken of a swine thyroid tissue section using a 50:50 single mode fiber coupler and a DC780SEFA DCFC, respectively. As seen in comparing the white and red boxed sections in the left and right images, using a DCFC reduces speckle artifacts in the image while increasing contrast of cellular features within the tissue sample. Figure 2 shows a series of confocal images taken of swine muscle tissue at depths from 15 µm to 105 µm using a single mode fiber coupler and a DC780SEB double-clad fiber coupler.

DCFCs can also be used instead of traditional dichroic beamsplitters to allow both OCT and fluorescence imaging of a sample using the same objective and scanning optics. The OCT signal (Figure 3) is collected in the single mode core of the double-clad fiber (DCF), while the fluorescence signal (Figure 4) is collected in the cladding. The core and cladding signals can be combined to produce a detailed image that distinguishes between bronchioles and blood vessels, as shown in Figure 5. 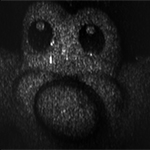 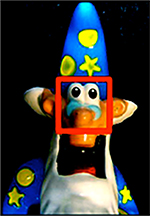 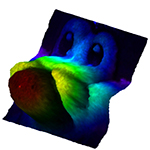 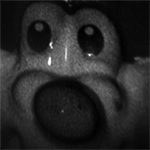 DCFCs can be used instead of traditional single mode 2x2 couplers in single-fiber endoscopy systems. When imaging a sample (Figure 6) with single mode fiber, laser speckle is present (Figure 7). Using both the single mode core and multimode cladding of the DCF for signal collection generates a higher quality image (Figure 8). Data from the core and inner cladding can also be used to create a three dimensional rendering of the subject as shown in Figure 9.

Figure 10 shows a sequence of 99 images of a wasp head obtained using a DCFC. Speckle-free reflectance maps are acquired using light collected from the multimode cladding of the DCF (left panel of the video). The right panel of the video shows an overlay of the interferometric height profiles collected using the DCF single mode core on top of the reflectance maps. This technique enables the construction of a 3-D profile of the specimen and requires no special sample preparation.

Figure 10. Speckle-free reflectance map using the multimode output of a DCFC (left) and an overlay of the interferometric height profile from the single mode output (right).

Our double-clad fiber couplers undergo stringent verification testing during production. The setups shown below are used to obtain a single mode transmission spectrum, insertion loss, and the multimode inner cladding transfer specification. Each coupler is shipped with an individualized data sheet providing a summary of the results of these tests. Click for a sample data sheet for 530 nm, 780 nm, 1060 nm, or 1300 nm.

The single mode input of the coupler is connected to a Broadband Light Source (BBS) through a single mode fiber and a spool of double-clad fiber (DCF). The SM coupler output is spliced to a coiled SM patch cable (to ensure cladding modes are stripped) that is connected to an Optical Spectrum Analyzer (OSA). A spectrum is recorded before and after the fibers are fused to create the coupler. The difference between the two spectra can be defined as either Insertion Loss (dB) or Transmission (%).

Castor Optics, a Montreal-based leading manufacturer of double-clad fiber couplers, has been a key strategic partner of Thorlabs since 2013. Castor was founded by Caroline Boudoux, Nicolas Godbout, Normand Brais, and Alex Cable to commercialize the innovative fiber coupler technology developed in the laboratory by Caroline Boudoux and Nicolas Godbout. The team at Castor works closely with Thorlabs' Montreal office to bring to market a broad range of fiber-based optical components for next-generation medical imaging devices and advanced instrumentation for use in the physical sciences.

About Caroline Boudoux
Caroline Boudoux earned her PhD from the Harvard-MIT Division of Health Sciences and Technology in 2007. She is an associate professor of engineering physics and principal investigator for the Laboratory for Optical Diagnoses and Imaging at École Polytechnique Montréal, a researcher at Sainte-Justine Hospital Research Center, and a visiting professor in the Department of Otology and Laryngology at Harvard Medical School. Her areas of research include biomedical imaging, optical coherence tomography, confocal and nonlinear microscopy, and endoscopic imaging.

About Nicolas Godbout
Nicolas Godbout earned his PhD in Engineering Physics from École Polytechnique de Montréal in 2000. Follwing this, he led the optical design team at ITF Optical Technologies. He is currently a professor and principal investigator for the Optical Fibers Laboratory at École Polytechnique Montréal. His research interests include nonlinear and quantum optics, fiber lasers, fiber-optic design and fabrication, characterization techniques, and biophotonics. 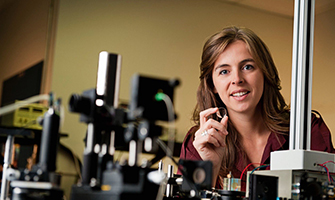 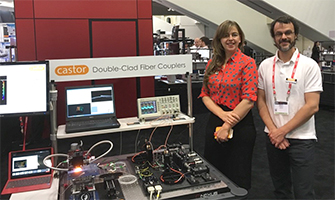