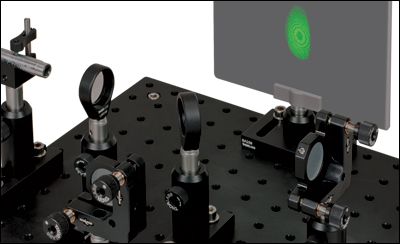 Interference fringes produced by the Michelson interferometer can be observed with the viewing screen.

Thorlabs' Bomb Tester Demonstration Kit uses an analogy experiment to demonstrate the principle of "interaction-free quantum measurement" discussed in the "Bomb Tester" thought experiment (published by Elitzur and Vaidman in 19931). This educational lab kit includes components to build a Michelson Interferometer, a viewing screen to observe the fringes, and a detector to measure changes in intensity of light exiting the interferometer.

Although some of the experiments require the use of a voltmeter, we have not included one with this educational kit since many physics labs are already stocked with them. For customers who would like to purchase a voltmeter to use with the kit, Thorlabs has a digital multimeter available here.

Thorlabs' line of educational products aims to promote physics, optics, and photonics by covering many classic experiments, as well as emerging fields of research. Each educational kit includes all the necessary components and a manual that contains both detailed setup instructions and extensive teaching materials. These lab kits are being offered at the price of the included components, with the educational materials offered for free. Technical support from our educational team is available both before and after purchase.

Purchasing Note: English and German language manuals/teaching information are available for this product. The imperial educational kit contains the English manual and US-style power cord. The appropriate manual and power cord will be included in the metric kit based on your shipping location. The power supplies and other electronic devices in both the metric and the imperial kit accept voltages of 230 VAC and 120 VAC. Some power supplies include a switch for selecting the mains voltage. See the respective manuals for details. Please contact Tech Support if you need a different language, cord style, or power supply. As with all products on our website, taxes are not included in the price shown below.

The "Bomb Tester" thought experiment demonstrates the principle of interaction-free quantum measurement by proposing a scenario where it is possible to detect the presence of a bomb (triggered by interacting with a photon) without detonating it. Thorlabs' Bomb Tester Demonstration includes a manual which guides students through the thought experiment as well as components and instructions for building an analogy experiment in the classroom. 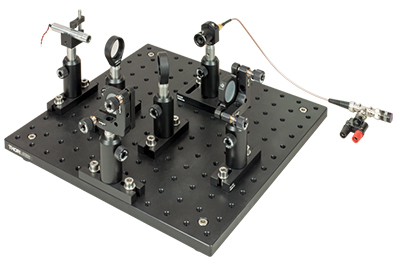 In a standard Michelson interferometer, light exits a laser and is split into two beams by a beamsplitter. The light then travels down two perpendicular arms of different lengths. Mirrors at the end of each arm reflect the light back to the beamsplitter, where the beams are combined. If the path lengths differ by an integer number of waves, the recombined beams will constructively interfere with each other, creating a bright spot on an observation screen positioned beyond the beamsplitter. Alternatively, if the paths differ by an odd number of half-waves, the two beams will destructively interfere with each other.

Interference experiments can also be performed by passing a single photon through the interferometer, rather than a continuous stream of light. According to quantum mechanics, each photon has two possible states in the interferometer which correspond to the presence of the photon in each arm. The observed interference pattern is created by the superposition of the wavefunctions describing these states. As a result, any photon sent through the system can only reach the screen where the two wave functions do not destructively interfere, i.e. in one of the bright rings observed in the standard experiment when photons pass through the system continuously. If the position on the screen of an individual photon sent through the system is recorded over many trials, the interference pattern will be reproduced.

Finally, consider what will happen to the interference pattern if one of the possible paths the photon can take is "marked." The Heisenberg uncertainty principle predicts that on quantum-mechanical scales, certain pairs of information cannot be known simultaneously. For example, the more precisely the position of a particle is known, the less precisely its momentum can be determined. "Marking" a path through the interferometer provides information about the location of the photon, which will destroy the superposition of states of the wavefunction and erase the interference pattern.

The bomb tester thought experiment examines how these principles can be used to detect the presence of an object without a photon interacting with it. The experiment proposes that there are a certain number of bombs designed to explode after they absorb a photon. Some of the bombs are active, while others are duds. The duds and active bombs cannot be differentiated unless they interact with light. The quantum-mechanics of a "which-path" system can be used to perform this test without detonating all of the active bombs. 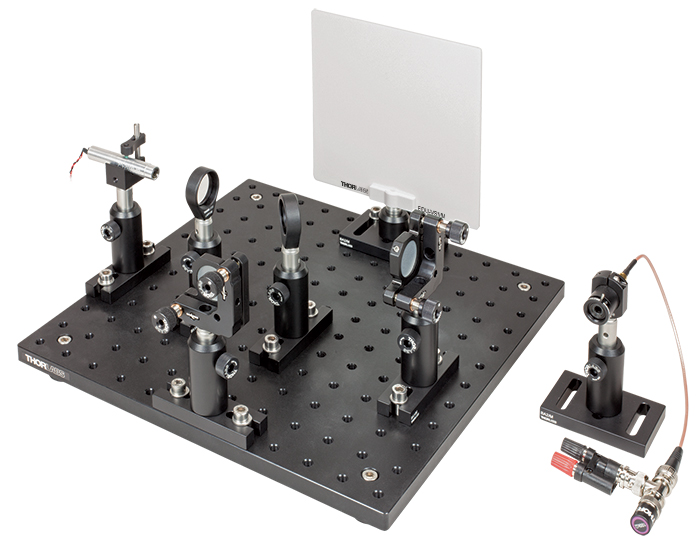 Mouse over the photo to see the corresponding components in the table to the right.

The Thorlabs Bomb Tester demonstration kit has been carefully engineered to be easy to set up and to give clear, reliable results. The kit contains many stock Thorlabs components, making it possible to expand the scope of the experiment by purchasing additional components. To perform the experiment using the included photodetector instead of the screen, a user-supplied voltmeter or multimeter, such as our DVM1, is required. We also recommend purchasing our SPW606 spanner wrench for mounting optics into the LMR1 optic mounts included with this kit.

Purchasing Note: English and German language manuals/teaching information are available for this product. The imperial kit contains the English manual and US-style power cord. The appropriate manual and power cord will be included in the metric kit based on your shipping location. Please contact Tech Support if you need a different language, cord style, or power supply. As with all products on our website, taxes are not included in the price shown below.

Thorlabs offers three demonstration kits that make use of an interferometry setup. Each kit is designed to target a different topic and includes accessories to support the experiments described in the kit manual. The EDU-MINT2 interferometer kit is designed to explore the experimental uses of a Michelson Interferometer, while the EDU-BT1 and EDU-QE1 analogy demonstrations are designed to explore concepts in quantum mechanics. Due to the nature of the experiments in the EDU-MINT2 kit, an intrinsically damped breadboard is included to minimize vibrations as students interact with the setup. This added feature supports some of the more challenging experiments, especially the wavelength measurement and white light interference exercises. The other two demonstration kits are built on lighter, aluminum breadboards as the experiments outlined in these kits require less interaction with the setups and vibration is therefore less of an issue. The table below outlines the key features and educational topics addressed by each kit to aid in choosing the best option for your classroom.

Converting the EDU-MINT2(/M) kit to enable the demonstrations outlined in the EDU-BT1(/M) manual is simple; only a photodetector and the necessary mounting hardware are needed.

We cordially thank Antje Bergmann and Pascal Kuhn (Karlsruhe Institute of Technology) for their prototype of a bomb tester setup.

Do you have ideas for an experiment that you would like to see implemented in an educational kit? Contact us at techsupport@thorlabs.com; we'd love to hear from you.