The ability to visualize hemodynamics (i.e., the dynamics of blood flow) is important for an understanding of many physiological processes such as stroke. Macroscopic techniques, such as laser speckle imaging, provide high fields of view but suffer from low spatial resolution of hundreds of microns. Microscopic techniques, most importantly two-photon microscopy, are able to achieve sub-cellular resolution yet have limited imaging speed, penetration depth, and field of view.

In contrast, Optical Coherence Tomography (OCT) provides an ideal combination of deep penetration, large field of view, and high resolution. In addition, it has several advantages as a modality for hemodynamics studies. OCT is capable of high-resolution imaging on the order of tens of seconds compared to tens of minutes for two-photon microscopy. Since OCT utilizes mostly single-scattered light, it is also possible to quantitatively determine blood flow using algorithms that determine the Doppler shift. However, to effectively use Doppler OCT, the vessel cannot be perpendicular to the probe beam and it must have a well-defined transverse velocity profile. Thus, capillary blood flow cannot be easily measured because the blood flow is often perpendicular to the probe beam and the velocities are less than 1 mm/s; consequently, there is no measurable Doppler shift.

In a recent study, Srinivasan et al. developed a new technique to provide information about capillary blood flow using OCT. Their technique breaks the OCT signal into a static component and a dynamic component. Equivalently, the power spectral density can be represented as a superposition of these static and dynamic scattering components. If high-pass filtering is used to suppress the static component, it is possible to isolate the high-frequency, dynamic component. Based on the random fluctuations in the dynamic component, it is possible to determine red blood cell velocity by estimating the bandwidth of the power spectral density. 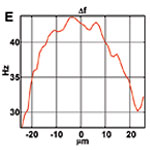 Figure 1. OCT velocimetry images showing the somatosensory cortex. (a)En face angiogram. (b) Power spectral density bandwidth map, where the color scale represents the bandwidth. (c) and (d) are enlarged images showing the dynamics of different branching points. (e) Bandwidth vs. position across a vein shows that the bandwidth is increased at the center, indicating a higher velocity.

In order to validate their technique, Srinivasan et al. observed rat brain hemodynamics using a prototype of Thorlabs’ Telesto® OCT system with a custom center wavelength of 1310 nm, transverse and axial resolutions of 3.6 μm in tissue, and an imaging speed of 47,000 axial scans per second. Each rat was anesthetized, a portion of the skull was removed, and an artificial cerebrospinal fluid was placed on the exposed cortex. Then the opening was covered with a glass coverslip. During imaging, the animals were mechanically ventilated with air and oxygen, and their blood pressure was measured to ensure it remained in the normal range (100 mm Hg ± 20 mm Hg).

Figure 1 shows OCT velocimetry of a rat somatosensory cortex. Figure 1a shows an OCT angiogram obtained using high-pass filtering to remove the static scattering and to highlight the dynamic portions of the image. However, the high-pass filter effectively integrates over the entire high-frequency portion of the spectrum, so no quantitative velocity information is available from this image. Figure 1b shows a color map of the high-frequency spectral density bandwidth. Note that the bandwidth is fairly constant in the non-branching segments but often displays large changes near branching points. Figures 1c and 1d show two detailed images of branching veins. In frame c, a smaller venule joins a larger vein, and the dynamics of the large vein do not change before and after the branch point. In contrast, frame d shows two veins of comparable size coming together to form one larger vein; here, a large change in the spectral density bandwidth is evident. In Figure 1e a cross-sectional plot of the spectral density bandwidth across a vein is shown. While the values increase at the center of the vessel, they do not go to zero at the edge as expected; this shows a limitation of the model and is attributed to biases in the estimation procedure, finite observation times, and noise.

OCT modalities to study hemodynamics are evolving in an effort to provide more complete information about blood flow dynamics. OCT angiography is able to highlight blood vessels, including smaller vessels, but does not give quantitative velocity information. While Doppler OCT techniques can be used to determine velocities in larger vessels, they are generally not sufficient for determining capillary blood flow. In contrast, the modeling technique presented here yields blood flow information for both large and small vessels. This complementary information advances knowledge of capillary hemodynamics and allows for a deeper understanding of many physiological processes.

All animal procedures were reviewed and approved by the Subcommittee on Research Animal Care at Massachusetts General Hospital.

The Srinivasan Biophotonics Laboratory develops novel optical imaging techniques and diagnostics with applications spanning from basic to clinical research. In particular, we are interested in neuronal control of hemodynamics and metabolism both in health and disease in the central nervous system, including the retina and brain.

To learn more about the Srinivasan Biophotonics Laboratory please visit their website.