Noise attenuation factor is the ratio of noise amplitude before and after the noise eater. See the Performance tab for detailed attenuation plots.

Noise Reduction
Utilizing a liquid crystal amplitude modulator, combined with an internal photodiode for power measurement and a feedback control circuit, these noise eaters can eliminate intensity noise in linearly polarized light, achieving amplitude stabilization of within 0.05% of a selected output power. The input power can be set to one of several ranges using the switches on the top of the unit, which permit the noise eater to remove noise without unnecessarily attenuating the signal power. The potentiometer is then adjusted to select the output power (see the Operation tab for more information). Long-term performance and frequency characterization for each noise eater model are shown on the Performance tab. 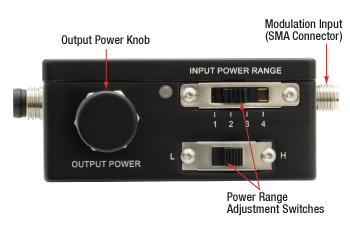 Power Attenuation and Modulation
These noise eaters are also capable of continuously attenuating and modulating the laser output using the liquid crystal retarder and integrated polarizer. Unlike most attenuators available, Noise Eaters attenuate the laser power rapidly without the use of any mechanical components. The noise eater's attenuation capabilities can be controlled via the onboard potentiometer or electrical modulation input.

Mechanical Compatibility
Thorlabs' Noise Eaters are post mountable in two orientations via 8-32 (M4) tapped holes. They also feature 4-40 tapped holes on the front and back for 30 mm Cage System compatibility and an SM1-threaded (1.035"-40) rear aperture for Ø1" Lens Tube compatibility.

In the graphs below, noise attenuation was measured as one of three parameters was varied: input power level, input signal modulation (noise) amplitude, and output signal attenuation. The graphs show that the noise eaters provide consistent performance regardless of changes in these parameters.

Noise Attenuation at Various Input Power Levels
Noise attenuation factor is the ratio of noise amplitude before and after the noise eater. In these graphs, the attenuation factor was measured for several different input power levels, with a fixed signal modulation depth (noise amplitude). The graphs below show that the noise eaters provide consistent performance regardless of input power level.

Noise Attenuation at Various Input Signal Modulations
In these graphs, the input signal was modulated with a sine wave to simulate noise. The attenuation factor was measured at a variety of modulation depths (noise amplitudes). The graphs below show that the noise eater provides consistent performance even at large noise levels.

Modulation Performance
Noise eaters with a modulation input can also be used as EO modulators. In these graphs, a sine wave with a 2.5 V amplitude and an increasing frequency was used to modulate a noiseless input beam. The graphs show that the maximum modulation depth decreases with increasing modulation frequency. Further testing has demonstrated that the modulation performance is consistent for a given noise eater model, regardless of the laser beam's input power.

Thorlabs' Liquid Crystal Noise Eaters are precision instruments for stabilizing, attenuating, and modulating laser power. Each noise eater consists of a variable attenuator (liquid crystal wave plate and polarizer), a calibrated beamsplitter, and a servo controller to control the modulator, as depicted in the block diagram to the right.

Linearly polarized light is input into the liquid crystal retarder, which, together with the output polarizer, acts as a variable retarder. A beamsplitter then sends a small part of the beam to a feedback loop consisting of a photodiode and control servo. The servo compares the optical signal to a preset signal level and applies the appropriate adjustment voltage until the optical signal reaches the desired level.

The noise eater can also be used as a variable attenuator, even without the presence of noise. By adjusting the resistance of the potentiometer, the user can set the desired output power level.

Click to Enlarge
The Noise Eater can be post mounted in two different orientations to match the input light's direction of polarization. A CRM1T(/M) Cage Rotation Mount and four 30 mm Cage Rods can mount a half-wave plate for fine tuning the polarization alignment.

Click to Enlarge
In the data plotted above, a sine wave with a 2.5 V amplitude and an increasing frequency was used to modulate a noiseless input beam. 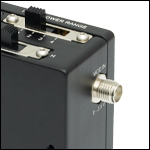 Click to Enlarge
The dotted lines represent operating wavelength regions for each of the noise eaters.

The selection switch(es) at the top of the noise eater are used to select the input power range. The power selector should be set to the lowest value that is still higher than the actual power of the laser. For example, if the NEL01A(/M) is being used with a beam power of 8 mW at 635 nm, the selector should be set to position 3, which represents 10 mW. For specifications, refer to the Max Power tables below.

The NEL01A(/M), NEL02A(/M), and NEL03A(/M) noise eaters use a silicon detector as part of the feedback loop, while the NEL04A noise eater uses a germanium detector. The responsivity of the detectors is different for different wavelengths, and so the power settings on the selector only correspond to the design wavelength of the detector [635 nm for Item #s NEL01A(/M) and NEL02A(/M), 780 nm for Item # NEL03A(/M), 1550 nm for Item # NEL04A(/M)]. The power range at a given wavelength is inversely proportional to the responsivity (a higher responsivity value will result in a lower power range value). The graph to the right shows the relative responsivity of both detectors at a range of wavelengths. The tables below show a rough estimate of the power settings at various wavelengths for each model.

The noise eater operates by varying how much of the signal is attenuated in order to reach the target output power and attenuate the noise. Since the noise eater can attenuate the signal but not amplify it, the clean output beam can only have a power as high as the minimum power level of the noisy signal. In practice, to remove all noise without unnecessarily attenuating the signal power, the output power level should be set to slightly lower than the minimum power of the noisy signal. See the manual for more information.