Definition of Regions of Interest
for Simple Pattern Matching

Thorlabs' LC100 Line Camera is designed for applications in optics, imaging, spectroscopy, biology, and industrial process control. It incorporates a 2048 pixel CCD array and is capable of detecting light in the range. With scan rates up to 900 scans per second (450 Hz with external trigger), this line camera offers trigger input and output, an analog output, and five digital software-controlled General Purpose Input/Outputs (GPIOs). The delay of the input and output triggers can be adjusted, and the analog output monitors the intensity of a selectable single pixel of the line.

The LC100 line camera is capable of analyzing up to 16 freely definable regions of interest (ROIs) from the recorded line scans; it can analyze each spectrum independently using simple pattern matching. The five GPIOs can be programmed to return specific logic patterns according to the results of the spectrum analysis. Since version 4.3 of the SPLICCO software package the LC100 features a standalone mode that allows the line camera to perform this analysis without being connected to a PC. 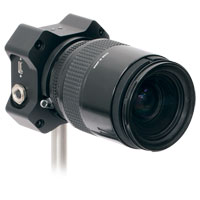 The LC100 with a Nikon F-Mount camera lens (not available from Thorlabs) mounted via an SM2NFM F-Mount to SM2 thread adapter. 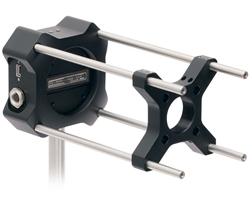 The rugged, dust-proof housing makes the LC100 line camera suitable for field applications and process control. Typical applications include using the line camera as a sensor in custom spectrometers or interferometers as well as position or size sensing devices. These cameras are also used in defect sensing applications as well as for fill level and edge detection.

The LC100(/M) will be retired without replacement when stock is depleted. If you require this part for line production, please contact our OEM Team. 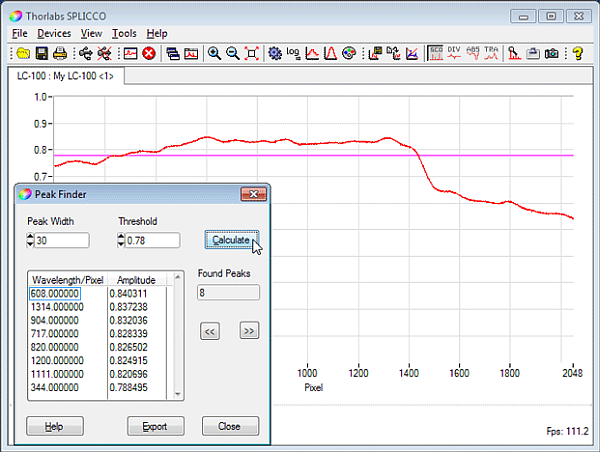 The LC100 Series Line Camera is featuring the easy-to-use SPLICCO software with graphical user interface. The package is designed for laboratory and manufacturing applications. The data, background, and peaks can be shown in a single graph. With the help of smoothing and averaging algorithms the user is able to enhance specific features of the spectra. Furthermore the software is able to handle several devices at one time which are presented in different windows. The above screen shows the peakfinder screen that lists all peaks with a given min peak-height (threshold) and peak width. SPLICCO also allows to record scans sequentially, see Sequential Recording below. 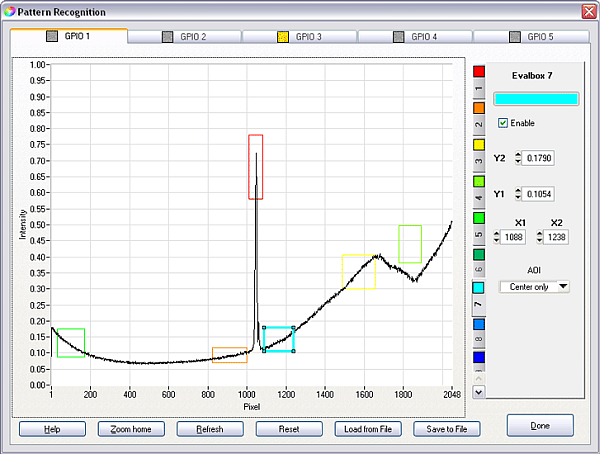 For the LC100 you can define up to 16 areas of interest (Evalboxes) with adjustable sizes at arbitrary locations in the Intensity vs. Pixel pane. They will be interrogated during scans. The result can be used for simple pattern matching and connected with customized logic to one of the 5 General Purpose Input Outputs (GPIO). 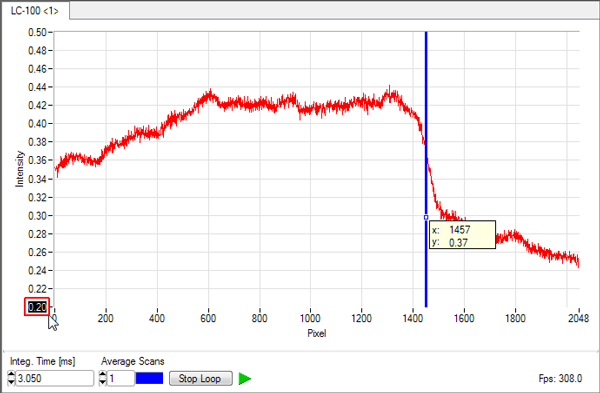 You can easily set the displayed range of the measured intensity by entering the min and max values at the y axis of the intensity plot. 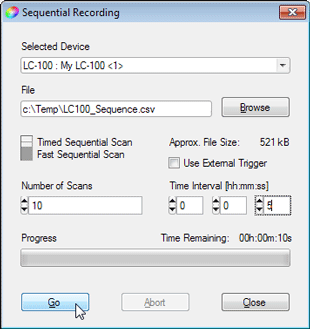 The SPLICCO software allows to sequentially record individual scans in CSV file format. A maximum of 1000 scans can be recorded at a rate of up to 900 scans per second.

This package also includes the instrument drivers for the National Instruments™, LabWindows™/CVI, and LabVIEW™* development environments. The drivers are intended for developers who want to extend or adapt the functionality of the device to their special requirements.

*This release candidate software version, which incorporates new features and/or bug fixes as outlined in the change log file on the download page, has been through several rounds of testing and there are currently no significant bugs. Once full testing and documentation is available, this version will become the standard software package. In the interim, Thorlabs is making this complete software file available for those customers whose research endeavors would benefit from the updated features.