The Michelson-type INT-MSI-1300 and INT-MSI-1300B interferometer subassemblies are designed to be used inside an OCT system with a balanced detection scheme for a wavelength range of 1250 to 1350 nm. For usage with faster sweeping lasers the bandwidth of the integrated detectors of the INT-MSI-1300B has been increased up to 100 MHz. Each module contains a fiber coupler network for a Michelson interferometer with outputs for the reference arm and the sample arm. The INT-MSI-1300 and INT-MSI-1300B only differ in the above mentioned bandwidth, the transimpedance gain, and their saturation power, see table on the right.

Internally used couplers are optimized for flat wavelength response and very low polarization dependent coupling losses. The fiber length is matched on both arms of the interferometer to within 0.2 mm while the housing includes FC/APC angled fiber adapters for robustness and ease of use. To suppress the generation of aliasing frequencies in the digitized fringe signals, which degrade the image quality, the integrated, high-gain balanced detector includes an active aliasing filter.

To support aligning the INT-MSI-1300 and INT-MSI-1300B into optical systems, an additional input for a 660 nm aiming laser and a specially designed WDM-coupler that combines the swept laser source (1300 nm) and the alignment laser (660 nm) were included in the subassembly.

Figure 1 shows a sample setup of the INT-MSI-1300B in a Time Domain OCT system. The incoming broadband light source, which has a central wavelength of 1300 nm, passes through a circulator and a broadband 50/50 fusion coupler. Back-reflected light from both the sample and reference arms of the interferometer are combined in the 50/50 fusion coupler, generating the interference fringe signals that pass through the circulator and the WDM coupler to the inputs of the balanced detector. The balanced detector output signal is acquired by the data acquisition device and processed to obtain the reconstructed OCT image. Figure 2 is a schematic showing how the IN-MSI-1300B can be incorporated into a frequency domain OCT system by replacing the translating mirror on the end of the reference arm with a fixed mirror.

Figure 1: Schematic of the INT-MSI-1300B in a Time Domain OCT Design

Figure 2: Schematic of the INT-MSI-1300B in a Sample Fourier Domain OCT Design

The internal fiber length of both arms of the interferometer match to within 0.2 mm, while the optical path lengths between the 50/50 fusion coupler and the inputs of the balanced detector are also matched to achieve optimal noise suppression (i.e., the maximum common mode rejection ratio CMRR). The internal couplers are optimized for flat wavelength response and very low PDCR (polarization-dependent coupling ratio), which makes the detected signal nearly independent of input polarization changes. Figure 3 shows the percentage of the input power at the reference and sample ports. Equal power for both ports is measured at 1300 nm (center wavelength). 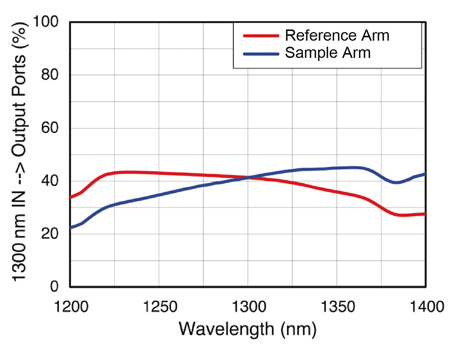 Figure 3: Coupling of the INT-MSI-1300B Measured From 1300 nm IN Port to the SAMPLE and REFERENCE ARM Ports