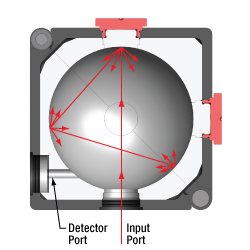 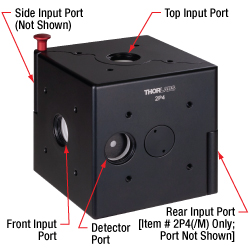 Click to Enlarge
Layout of Ports on Integrating Sphere Housing

Thorlabs' Integrating Spheres are general-purpose devices for high sensitivity measurements of optical signals. An integrating sphere evenly spreads the incoming light by multiple reflections over the entire sphere surface. This makes it the ideal instrument for many applications such as laser power, flux, reflectance, and radiance measurements. The input ports feature SM05 (0.535"-40) threading and can be equipped with reflective-coated port plugs, fiber adapters, or any SM05-threaded component. The detector port is also SM05 threaded for compatibility with our SM05PD series photodiodes; the port is recessed to avoid directly exposing the active area of the photodiode to the incident light.

The sphere is manufactured from PTFE-based bulk material that has high reflectance in the 250 - 2500 nm wavelength range (see the Specs tab for details) and is resistant to heat, humidity, and high levels of radiation. This reflective surface provides a specific roughness and diffusive reflection properties. It should not be cleaned using solvents, as this could damage the inner surface. We only recommend using compressed air for cleaning the inner surface of the integrating spheres (Item #s CA4-US and CA6-EU).

These integrating spheres are compatible with Thorlabs' SM05 (0.535"-40) thread standard as well as our 30 mm cage systems, thereby enabling easy integration into existing setups. Each integrating sphere is also post mountable via the 8-32 (M4) tapped hole on the bottom of the unit.

Thorlabs can calibrate integrating spheres with user-selected sensors upon request and provide the pertinent NIST- and/or PTB-traceable certificates of calibration. Contact Tech Support for more information.

We also offer modular integrating spheres that can be configured with a variety of housing interfaces for compatibility with different optomechanical systems.

Scroll down to read about things to consider when building integrating spheres into setups and analyzing data results.

Click to Enlarge
Figure 1: Typical yields at each wavelength are around four orders of magnitude lower than the excitation wavelength. [4]

A material of choice for coating the light-diffusing cavities of integrating spheres is polytetrafluoroethylene (PTFE). This material, which is white in appearance, is favored for reasons including its high, flat reflectance over a wide range of wavelengths (see the Specs tab for details) and chemical inertness.

However, it should be noted that integrating spheres coated with both PTFE and barium sulfate, which is an alternative coating with lower reflectance, emit low levels of ultraviolet (UV) and blue fluorescence when irradiated by UV light. [1-3]

As the levels of hydrocarbon contaminants in the PFTE increase, fluorescence increases. A related effect is a decrease of the light output by the integrating sphere over the absorption band wavelengths, due to more light from this spectral region being absorbed. [1, 3]

Impact on Applications
The UV and blue fluorescence from the PTFE has negligible effect on many applications, since the intensity of the fluorescence is low and primarily excited by incident wavelengths <300 nm. Applications sensitive to this fluorescence include long-term measurements of UV radiation throughput, UV source calibration, establishing UV reflectance standards, and performing some UV remote sensing tasks. [1]

Minimizing Fluorescence Effects
Minimizing and stabilizing the fluorescence levels requires isolating the integrating sphere from all sources of hydrocarbons, including gasoline- and diesel-burning engine exhaust and organic solvents, such as naphthalene and toluene. It should be noted that, while hydrocarbon contamination can be minimized and reduced, it cannot be eliminated. [1]

Since the history of each integrating sphere's exposure to hydrocarbon contaminants is unique, it is not possible to predict the response of a particular sphere to incident radiation. When an application is negatively impacted by the fluorescence, calibration of the integrating sphere is recommended. A calibration procedure described in [4] requires a light source with a well-known spectrum that extends across the wavelength region of interest, such as a deuterium lamp or synchrotron radiation, a monochromator, a detector, and the integrating sphere.

Click to Enlarge
Figure 2: Measuring diffuse sample transmittance and reflectance as shown above can result in a distorted sample spectrum due to sample substitution error. The problem is that the reflectivity over the sample area is different during the reference and sample measurements.

Click to Enlarge
Figure 3: The above configuration is not susceptible to sample substitution error, since the interior of the sphere is the same for reference and sample measurements. During the reference measurement the light travels along (R), and no light is incident along (S). The opposite is true when a sample measurement is made.

Absolute transmittance and absolute diffuse reflectance spectra of optical samples can be found using integrating spheres. These spectra are found by performing spectral measurements of both the sample of interest and a reference.

Sample substitution errors incurred while acquiring the sample and reference measurement sets can negatively effect the accuracy of the corrected sample spectrum, unless the chosen experimental technique is immune to these errors.

Conditions Leading to Sample Substitution Errors
An integrating sphere's optical performance depends on the reflectance at each point on its entire inner surface. Often, a section of the sphere's inner wall is replaced by the sample when its transmittance and diffuse reflectance spectra are measured (Figure 2). However, modifying a section of the inner wall alters the performance of the integrating sphere.

Sample substitution errors are a concern when the measurement procedure involves physically changing one sample installed within the sphere for another. For example, when measuring diffuse reflectance (Figure 2, bottom), a first measurement might be made with the standard reference sample mounted inside the sphere. Next, this sample would be removed and replaced by the sample of interest, and a second measurement would be acquired. Both data sets would then be used to calculate the corrected absolute diffuse reflectance spectrum of the sample.

This procedure would result in a distorted absolute sample spectrum. Since the sample of interest and the standard reference have different absorption and scattering properties, exchanging them alters the reflectivity of the integrating sphere over the samples' surface areas. Due to the average reflectivity of the integrating sphere being different for the two measurements, they are not perfectly compatible.

Solution Option: Install Sample and Reference Together
One experimental technique that avoids sample substitution errors acquires measurement data when both sample and reference are installed inside the integrating sphere at the same time. This approach requires an integrating sphere large enough to accomodate the two, as additional ports.

The light source is located external to the integrating sphere, and measurements of the sample and standard reference are acquired sequentially. The specular reflection from the sample, or the transmitted beam, is often routed out of the sphere, so that only the diffuse light is detected. Since the inner surface of the sphere is identical for both measurements, sample substitution errors are not a concern.

Alternate Solution Option: Make Measurements from Sample and Reference Ports
If it is not possible to install both sample and standard references in the integrating sphere at the same time, it is necessary to exchange the installed sample. If this must be done, sample substitution errors can be removed by following the procedure detailed in [1]. 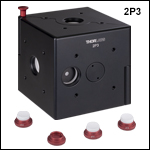 These integrating spheres have either three or four input ports and one detector (output) port. The input ports feature internal SM05 (0.535"-40) threading and can be equipped with coated port plugs (included) or threaded fiber adapters (sold separately below). The detector port is also SM05 threaded and directly accepts our SM05PD series photodiodes; the port is recessed to avoid directly exposing the active area of the photodiode to the incident light. 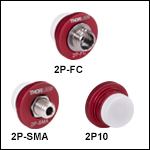 These accessories feature external SM05 (0.535"-40) threading and are designed for the input ports of the integrating spheres sold above. All three of these items have one side that is made of the same reflective material as the integrating sphere and curved to match the radius of curvature of the sphere's inner surface.