Click to Enlarge
The circular gratings have engravings that indicate the line orientation.

Click to Enlarge
The item number and serial number are engraved on the edge of each rectangular grating.

Thorlabs' Visible Volume Phase Holographic (VPH) Transmission Gratings are ideal for applications that require low polarization-dependent loss or high diffraction efficiency. Gratings with a 532 nm design wavelength (DWL) have a spatial frequency of 1800 lines/mm, and gratings with a 600 nm DWL have a spatial frequency of 600 lines/mm. Each wavelength and spatial frequency combination is available in three sizes: Ø1", Ø2", or 50 mm x 30 mm. These unique transmission gratings exhibit high first-order diffraction efficiencies across broad bandwidths, low polarization-dependent loss, extremely low scatter of stray light between diffraction order peaks, and minimal ghosting, making them well-suited for use in spectroscopy.

VPH gratings are different from traditional gratings since they have no surface grooves. In this case, diffraction occurs as incoming light crosses through a DCG film with periodic index modulations sealed between two glass substrates. To minimize transmission losses due to reflection, the air-to-glass interfaces are also antireflection (AR) coated. Unlike other gratings, these VPH gratings are resistant to damage from fingerprints and aerosols, as well as easy to maintain since they can be cleaned using standard optics cleaning methods. For more information, see the Gratings Tutorial tab. After having undergone extensive environmental and thermal shock testing, our VPH gratings show excellent resilience under these conditions. Each grating is engraved with its Item # on the edge as seen in the image to the right. The circular gratings feature an engraving that indicates the line orientation. The line pair orientation of the rectangular gratings is perpendicular to the long (50 mm) edge.

The Gratings Guide tab provides a summary of the other grating types that Thorlabs offers, while information on the differences between grating types can be found on the Gratings Tutorial tab.

Note: On some gratings, a holographic mirroring effect may be seen. This is not a defect in the grating, but a non-intrusive artifact written into the film during the exposure process. These interference patterns do not affect performance of the grating.

Custom Volume Phase Holographic Gratings
Thorlabs is capable of fabricating custom VPH gratings to support the needs of other applications, such as laser pulse compression and astronomy. High dispersion can be achieved to meet custom needs with line densities ranging from 400 to 1800 lines/mm, DWLs from 300 to 2000 nm, and bandwidths of 20 to 500 nm. Customized round or square optics can be achieved with dimensions as small as 10 mm and as large as 60 mm. Please contact Tech Support with custom inquiries.

Mounts and Adapters
For round gratings, we recommend using a rotation mount, such as our nested or kinematic rotation mounts, so that the user can align the line orientation to a fixed degree value and use the mount to rotate the optic while tracking the displacement of the first-order diffracted beam. The rectangular gratings can be mounted directly into the KM100C Right-Handed or KM100CL Left-Handed Kinematic Rectangular Optic Mount for precise and stable mounting and alignment.

Thorlabs uses a clean room facility for assembly of gratings into mechanical setups. If your application requires integrating the grating into a sub-assembly or a setup, please contact Tech Support to learn more about our assembly capabilities.

Diffraction gratings, either transmissive or reflective, can separate different wavelengths of light using a repetitive structure embedded within the grating. The structure affects the amplitude and/or phase of the incident wave, causing interference in the output wave. In the transmissive case, the repetitive structure can be thought of as many tightly spaced, thin slits. Solving for the irradiance as a function wavelength and position of this multi-slit situation, we get a general expression that can be applied to all diffractive gratings when

known as the grating equation. The equation states that a diffraction grating with spacing

will deflect light at discrete angles (

), dependent upon the value

is the order of principal maxima. The diffracted angle,

, is the output angle as measured from the surface normal of the diffraction grating. It is easily observed from Eq. 1 that for a given order

, different wavelengths of light will exit the grating at different angles. For white light sources, this corresponds to a continuous, angle-dependent spectrum.

One popular style of grating is the transmission grating. The sample diffraction grating with surfaces grooves shown in Figure 1 is created by scratching or etching a transparent substrate with a repetitive series of narrow-width grooves separated by distance

. This creates areas where light can scatter.

The incident light impinges on the grating at an angle

, as measured from the surface normal. The light of order

exiting the grating leaves at an angle of

, relative to the surface normal. Utilizing some geometric conversions and the general grating expression (Eq. 1) an expression for the transmissive diffraction grating can be found:

are positive if the incident and diffracted beams are on opposite sides of the grating surface normal, as illustrated in the example in Figure 1. If they are on the same side of the grating normal,

must then be considered negative.

Both the reflective and transmission gratings suffer from the fact that the zeroth order mode contains no diffraction pattern and appears as a surface reflection or transmission, respectively. Solving Eq. 2 for this condition,

, we find the only solution to be

=0, independent of wavelength or diffraction grating spacing. At this condition, no wavelength-dependent information can be obtained, and all the light is lost to surface reflection or transmission.

This issue can be resolved by creating a repeating surface pattern, which produces a different surface reflection geometry. Diffraction gratings of this type are commonly referred to as blazed (or ruled) gratings. More information about this can be found in the section below.

The blaze wavelength is one of the three main characteristics of the blazed grating. The other two, shown in Figure 3, are

, the groove or facet spacing, and

) are determined from the surface normal of the grating. However, the significant difference is the specular reflection geometry is dependent on the blaze angle,

The 0th order reflection from a blazed grating is shown in Figure 4. The incident light at angle

. This is analogous to specular reflection from a flat surface.

, from a blazed grating occurs at the blaze angle geometry. This angle is defined as being negative if it is on the same side of the grating surface normal as

. Performing some simple geometric conversions, one finds that

Figure 6 illustrates the specific case where

= 0°, hence the incident light beam is perpendicular to the grating surface. In this case, the 0th order reflection also lies at 0°. Utilizing Eqs. 3 and 4, we can find the grating equation at twice the blaze angle:

The Littrow configuration refers to a specific geometry for blazed gratings and plays an important role in monochromators and spectrometers. It is the angle

at which the grating efficiency is the highest. In this configuration, the angle of incidence of the incoming and diffracted light are the same,

, is dependent on the most intense order (

, and the grating spacing

. It is easily shown that the Littrow configuration angle,

, is equal to the blaze angle,

, at the design wavelength. The Littrow / blaze angles for all Thorlabs' Blazed Gratings can be found in the grating specs tables.

is the central wavelength, and

The first issue with using higher order diffraction patterns is solved by using an Echelle grating, which is a special type of ruled diffraction grating with an extremely high blaze angle and relatively low groove density. The high blaze angle is well suited for concentrating the energy in the higher order diffraction modes. The second issue is solved by using another optical element: grating, dispersive prism, or other dispersive optic, to sort the wavelengths/orders after the Echelle grating.

. The fringe planes for transmission gratings are perpendicular to the plane of the plate as seen in Figure 8, allowing any frequency of light to pass through the plate. Diffraction occurs as incoming light crosses through the DCG film. Therefore, the three major factors that determine performance are film thickness, bulk index (the average index of refraction between Bragg planes), and index modulation (the difference of index of refraction between the Bragg planes). The incident light enters the grating at an angle of

, as measured from the surface normal. The light of order

exiting the grating leaves at an angle of

, relative to the surface normal. The grating expression mentioned above can be used to calculate diffraction angles for volume phase holographic gratings since dispersion is based on the line density. The quality of the grating is determined by the fringe contrast, with a poor fringe contrast resulting in low efficiency or no grating at all.

The DCG film is taken through multiple quality control steps to ensure it performs up to standard and then cut into the desired size. The film is sealed between two glass covers to prevent degradation of the material. Since the DCG film is contained between two glass substrates, VPH gratings have high durability and long lifetimes, as well as easy maintenance compared to other gratings that can be easily damaged.

Please note that dispersion is based solely on the number of grooves per mm and not the shape of the grooves. Hence, the same grating equation can be used to calculate angles for holographic as well as ruled blazed gratings.

Thorlabs offers two types of transmission gratings: ruled and volume phase holographic. The ruled transmission gratings are created by scratching or etching a transparent substrate with a repetitive, parallel structure, creating areas where light can scatter. These gratings have a sawtooth diffraction profile and are made of epoxy and/or plastic imprints from a master copy, in a process called replication. Our volume phase holographic diffraction gratings consist of a dichromated gelatin (DCG) film between two glass substrates. These gratings have a sinusoidal wave diffraction pattern written on the DCG film using a laser setup. For more information, please refer to the Gratings Tutorial tab.

Reflective grating master copies are made by depositing a metallic coating on an optic and ruling parallel grooves in the surface. Thorlabs' reflective gratings are made of epoxy and/or plastic imprints from a master copy, in a process called replication. In all cases, light is reflected off of the ruled surface at different angles corresponding to different orders and wavelengths. All of Thorlabs' ruled reflective diffraction gratings exhibit a sawtooth profile, also known as blazed, while our reflective holographic diffraction gratings exhibit a sinusoidal profile. For more information, please refer to the Gratings Tutorial tab.

Selecting a grating requires consideration of a number of factors, some of which are listed below:

Blaze Wavelength:
Ruled gratings have a sawtooth groove profile created by sequentially etching the surface of the grating substrate. As a result, they have a sharp peak efficiency around their blaze wavelength. Holographic gratings are harder to blaze, and tend to have a sinusoidal groove profile resulting in a less intense peak around the design wavelength. Applications centered around a narrow wavelength range could benefit from a ruled grating blazed at that wavelength.

For further information about gratings and selecting the grating right for your application, please visit our Gratings Tutorial.

Caution for Gratings with Surface Grooves:
The surface of a diffraction grating with surface grooves can be easily damaged by fingerprints, aerosols, moisture or the slightest contact with any abrasive material. Gratings should only be handled when necessary and always held by the sides. Latex gloves or a similar protective covering should be worn to prevent oil from fingers from reaching the grating surface. Solvents will likely damage the grating's surface. No attempt should be made to clean a grating other than blowing off dust with clean, dry air or nitrogen. Scratches or other minor cosmetic imperfections on the surface of a grating do not usually affect performance and are not considered defects. Conversely, volume phase holographic gratings can be cleaned using standard optics cleaning procedures and have high durability. 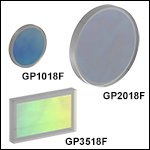 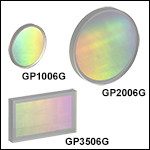