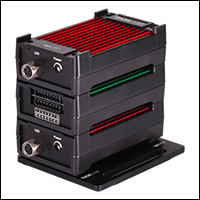 Click to Enlarge
The connection channels help create a stable stack, which can include either the upLED (red housing) or upTEMP (green housing) devices. The stack can also be mounted to an optical table or breadboard using the upBASE base plate. 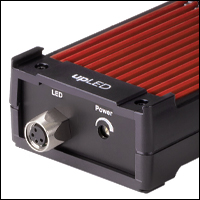 Click to Enlarge
Connection channels at the corners of the upLED housing are included for easy stacking of modules. 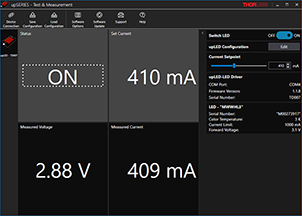 Click to Enlarge
The main upSERIES software GUI displays the LED status and set current, as well as the voltage and current as measured by the upLED.

Thorlabs' upLED™ LED Driver is a compact, USB-controlled driver for use with Thorlabs LEDs that feature an M8 x 1 circular connector. This constant-current driver can be controlled manually with a linear potentiometer (see Front & Back Panels tab) or through the included upSERIES software, making it ideal for both laboratory and factory environments.

Each upLED driver controls a single LED. To retain the compact footprint (86.7 mm x 52.5 mm) of a single unit while controlling several LEDs, the upLED housing has been designed with connection channels at the corners, which help create a stable assembly of devices. The upLED can also be conveniently stacked up with a upTEMP™ multichannel USB temperature logger to monitor temperature. The two devices feature the same stackable housing and can be simultaneously controlled using the upSERIES Software interface.

The upLED driver, as well as a stack of upSERIES devices, can be securely mounted to an optical table or breadboard using the upBASE Base Plate (see below for details). Note that the base plate extends the footprint of the driver to 86.7 mm x 70 mm.

Alternatively, a user-assembled power supply may be used. Each driver ships with a power supply adapter, into which the user can insert two 0.5 mm2 wires that provide at least 1 A at 12 V. This adapter plugs into a receptacle on the rear panel that is shown in the Front & Back Panels tab. To protect against polarity reversal of the power supply and adapter connections, the upLED features input polarity protection; the upLED will not be destroyed, but it will not drive the connected LED.

Please note that while the upLED can draw some power from the USB connection, this is only used to operate the microprocessor, which enables the software GUI to show whether a power supply is available and to read out data from the connected LED. The LED cannot be powered by the USB connection.

LED Compatibility
The upLED driver is designed for use with Thorlabs LEDs that feature M8 x 1 circular connectors, including select models of our Mounted, Fiber-Coupled, Collimated, and Diffuse Backlight LEDs. This driver automatically adjusts the maximum current setting based on the information stored in the EEPROM chip, protecting the connected LED. PCB Mounted LEDs can also be driven with the upLED driver when used with the CAB-LEDD1 LED connection cable. Alternative LEDs can also be used, provided they have an M8 x 1 connector (see Pin Diagrams tab) and meet the specifications listed on the Specs tab. Note that the current limit will automatically be set to 1.2 A for these LEDs unless a lower value is specified in the software GUI.

Back Panel
The upLED driver features a USB 2.0 Type Mini-B interface, which connects the device with a computer running the upSERIES software. A USB-ABL-60 USB 2.0 type-A to mini-B cable is included with each device and this cable features an M2.5 locking screw to prevent accidental disconnections.

A status LED indicator is included on the back panel to easily identify the operation status of the device. When the LED indicator is green, the power supply is available, and an LED is connected and turned on; the LED blinks green when the connected LED is switched off. The indicator LED can also appear yellow or blink yellow, red, and green; these respectively signify that a power supply is available but an LED is not connected and the upLED is connected to an LED and PC but not to a power supply. Additional colors can also appear for special states; see the device manual for more details.

PC Control and Software
The upLED driver is controlled via a USB 2.0 connection and can be controlled through the upSERIES software. The software GUI displays the status of the LED and the current set point, as well as the measured voltage and current as reported by the upLED. When a Thorlabs LED is used, the current limit is automatically set using the information provided by the EEPROM. For more information on the upSERIES software features, please see the Software tab.

Note: The software includes an option that automatically repowers the LED after connecting a power supply, which allows the LEDs to power-up immediately without any safety notice. Always direct LEDs away from persons and reflecting surfaces prior to powering up the upLED.

Manual Control
The upLED can also control LEDs without the upSERIES software. If the "Repower LED after Power Cycle" setting is selected in the software, the LEDs can be started automatically after connection to a power supply, and the current applied depends on the software settings. If the current source is set to "Potentiometer", the LED lights up with the current set by the potentiometer value at the moment of power-up. However, when the current source is set to "User-defined", the LED lights up with the user-defined current set in the software and written to the upLED memory. See the Software tab for more details.

LEDs can also be manually controlled by using the POWER dial, i.e., a potentiometer, on the upLED; please see the Front & Back Panels tab for the location of this dial. The current is linearly increased by turning the power dial clockwise, and the maximum current is set by the current limit in the software or read out from the LED EEPROM. Note that if a Thorlabs LED is not used, the current limits is set to the maximum current of the upLED (1.2 A). 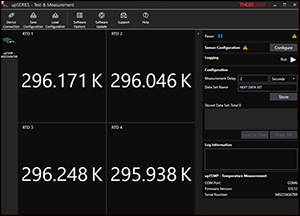 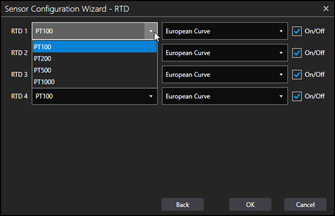 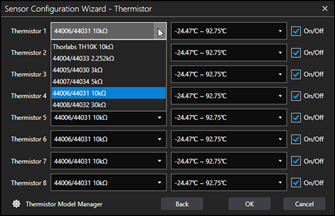 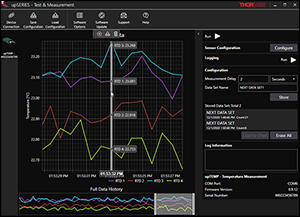 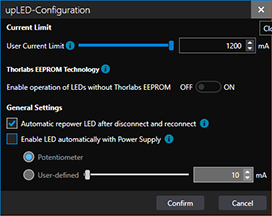 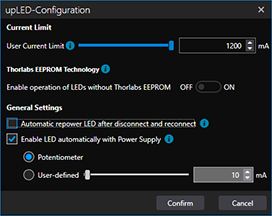 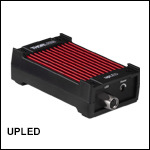 Thorlabs' upLED™ LED Driver is a compact USB-controlled driver that can be controlled manually with a linear potentiometer (see Front & Back Panels tab) or through the included upSERIES software. Intended for use with Thorlabs LEDs that feature an M8 x 1 circular connector, this driver it is able to read current information stored in the EEPROM.

Each upLED driver can control a single LED. When using more than one driver to control multiple LEDs, the upLED devices can be stacked using the connection channels on the corners of the housing. This creates a stable assembly that retains the compact footprint of a single device (86.7 mm x 52.5 mm). For secure mounting to an optical table or breadboard, we recommend using the upBASE base plate sold below. 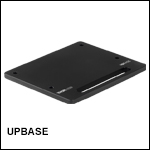 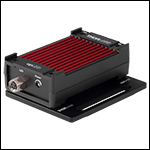 Click to Enlarge
An upLED module mounted onto the upBASE base plate.

The upBASE Base Plate securely mounts an upSERIES module to an optical table or breadboard. A slotted hole for 1/4" and M6 cap screws provides compatibility with both imperial and metric hole patterns. The bottom of the upSERIES module is connected to the base plate using the four included M3 x 0.5 countersunk screws. Fabricated from black anodized aluminum, the bottom of this base has three contact pads for stable mounting; one contact pad is located around the slotted hole and the other two are around the countersunk holes at the opposite end of the plate.