How are two mirrors used to align a laser beam along a different path?

The first steering mirror reflects the beam along a line that crosses the new beam path. A second steering mirror is needed to level the beam and align it along the new path. The procedure of aligning a laser beam with two steering mirrors is sometimes described as walking the beam, and the result can be referred to as a folded beam path. In the example shown in Video Clip 1, two irises are used to align the beam to the new path, which is parallel to the surface of the optical table and follows a row of tapped holes. 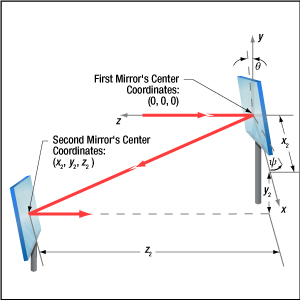 
Figure 1: The beam reflected from Mirror 1 will be incident on Mirror 2, if Mirror 1 is rotated around the x- and y-axes by angles θ and ψ, respectively. Both angles affect each coordinate (x2 , y2 , z2 ) of Mirror 2's center. Mirror 1's rotation around the x-axis is limited by the travel range of the mount's pitch (tip) adjuster, which limits Mirror 2's position and height options.

Figure 2: The adjusters on the first kinematic mirror mount are tuned to position the laser spot on the aperture of the first iris.

Video Clip 1: Two mirrors in KM100 kinematic mounts route the beam from a PL202 collimated laser package along the path defined by the two IDA25 irises. The beam is aligned when halos of laser light surround each iris' aperture and the laser spot is visible on the BHM1 ruler, which was placed behind the second iris to act as a viewing screen.

Iris Setup
The new beam path is defined by the irises, which in Video Clip 1 have matching heights to ensure the path is level with respect to the surface of the table. A ruler or calipers can be used to set the height of the irises in their mounts with modest precision.

When an iris is closed, its aperture may not be perfectly centered. Because of this, switching the side of the iris that faces the beam can cause the position of the aperture to shift. It is good practice to choose one side of the iris to face the beam and then maintain that orientation during setup and use.

If a yaw axis adjuster has approached a limit, note the required direction of the reflected beam and then rotate the yaw adjuster to the center of its travel range. Turn the mirror in its mount until the direction of the reflected beam is approximately correct. If the mirror cannot be rotated, reposition one or both mirrors to direct the beam roughly along the desired path. Repeat the alignment procedure to finely tune the beam's orientation.

If a pitch axis adjuster has approached a limit, either increase the two mirrors' separation or reduce the height difference between the new and incident beam paths. Both options will result in the pitch adjuster being positioned closer to the center of its travel range after the alignment procedure is repeated.