The Chrolis software allows users to set the power level and define the pulse lengths, pulse timings, and internal and external trigger signals for each LED independently.

Thorlabs' Chrolis™ 6-Wavelength High-Power LED Sources are ideal for fluorescence imaging or any other application that requires up to six wavelengths of light. These user-configurable light engines efficiently combine the output of all six LEDs into a single liquid light guide (LLG); Thorlabs' LLG03-4H LLG is included. Compared to conventional non-LED sources like halogen and gas discharge lamps, these mercury-free 6-wavelength light sources offer many advantages such as higher signal-to-noise ratios (due to narrow bandwidth emission), high stability (see the Stability tab), longer life, and lower replacement costs. The Chrolis LED sources are available in two pre-set configurations; user-configured LED sources can also be ordered using the tool below.

The Chrolis light engines are designed to couple light into a Ø3 mm core liquid light guide (LLG). The typical output power for each LED from the included LLG03-4H LLG is shown in the table to the right. Each light source is equipped with an integrated cooling system that cools the tip of the LLG using thermoelectric coolers (TECs), thus extending the LLG lifetime. The optical output port for the LLG, LLG release lever, and On/Off button are located on the front of the housing for easy access.

The side panel is engraved with the LED schematic and spaces for the user to record the installed LEDs, as shown in the image above. Users can easily remove this panel by unscrewing the five setscrews with a 2 mm (5/64") hex key and access the LED and dichroic mirror modules. To remove LED modules, press the locking pin handle and turn toward "OPEN", then pull outward. Dichroic mirror modules are secured by magnets and can be removed by pulling outward on the handle. The modules are mounted on an actively cooled heat sink and the temperature of the LED modules is continuously monitored to ensure highly stable performance. Each LED module also has a removable SM1-threaded filter holder that is magnetically held in place in front of the LED. This feature provides space for Ø1" (Ø25 mm) bandpass filters up to 0.248" (6.3 mm) thick to be inserted in the Chrolis light paths and restrict the spectrum emitted by each LED. For instructions on inserting bandpass filters, please refer to the Chrolis Operation Manual available by clicking the Docs icon (

Every 6-wavelength LED source includes a software package with an easy-to-use GUI; see the Software tab for more details. Once the light source is connected via a USB interface, this intuitive software can detect the LED configuration and display the corresponding LED spectra. Users can set the intensity of each LED as well as modulate them for pulsed light applications. A different pulse train can be defined for each LED, with an allowable on/off time of 5 µs to 71 minutes; see the image below. For externally triggering the LEDs, we offer a breakout box that can be configured with the Chrolis software. LED pulse trains can be linked in the software such that a single external trigger will initiate a user-defined pulse sequence for up to six LEDs. 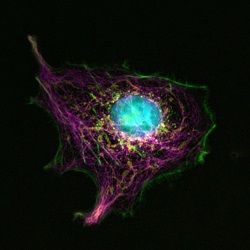 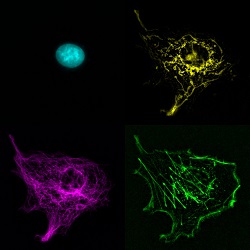 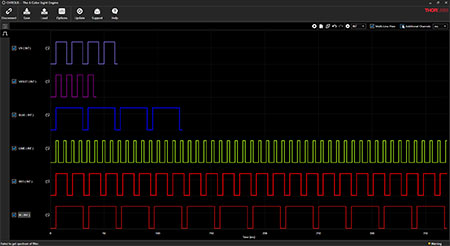 Click to Enlarge
Users can modulate individual LEDs using the Chrolis software. The GUI displays the user-defined pulse trains for each LED.

Chrolis 6-wavelength LED sources with user-selected LED wavelengths can be configured using the tool below. The available LED wavelengths are listed in the LED Options table above. Due to the optical configuration, LEDs with closely overlapping spectra (specifically, 405/420 nm and 525/565 nm) cannot be combined in the same source; all other LED combinations are allowed. The appropriate dichroic mirrors and LED positions are pre-set based on the user-selected wavelengths for each source.

If you desire an LED configuration other than those available below, such as a source with fewer than six LEDs, please contact Tech Support.

This graph shows the normalized output spectra for each LED module and does not represent the relative LED power that will be output from the Chrolis.

The thermal management of the Chrolis LEDs has been optimized to provide stable power output. The stability of the CHROLIS-C2 LED modules was tested over a 24 hour period with each LED in CW mode at maximum intensity. The LED output power was monitored with an S142C Integrating Sphere Photodiode Sensor connected to a PM100USB Power Meter Interface. As shown in the plots below, the LED modules maintained stable power levels throughout the time period. Over the first 5 minutes, each LED experienced a small power drop on the order of 1 to 2%, which corresponds to the period of time required for the LED to warm up to the point where it is thermally stable. After warm up, the typical variations in output power were smaller than 0.5%.

Software installation package for the Chrolis 6-wavelength LED source. Click the button below to access the Chrolis software page.

The Chrolis software allows the user to individually control each LED via an easy-to-use GUI. The Chrolis light source connects to a PC through a USB interface; see the table below for recommended system requirements. The intuitive software can detect the connected light source and the LED configuration, as shown in the image to the lower left. The Settings tab displays the position, nominal wavelength, and color of the six installed LEDs. The user also has the option to input custom names for each LED, which can be used as the LED labels in other tabs. All of the user-defined settings can be exported as an XML file and loaded back into the software for future uses to ensure consistency between experiment runs.

The LEDs can be activated in the Continuous Wave (CW) or Pulsed Mode Master Tabs, which are located on the left side in the main screen below the "Disconnect" button; see the images to the lower right and center. In both modes, the power level of each LED can be set to a certain percentage. The image to the lower right shows the Master tab in the CW mode. The master power slider will change the power of all LEDs simultaneously while keeping the ratio constant. A plot of each LED spectrum is displayed to the right of the power sliders. The temperature of every LED is monitored and shown under the spectra plot. If one LED exceeds 90 °C, all LEDs will turn off automatically. To turn on the light source, the user must toggle the individual power switch of each LED to "ON" and then toggle the master power switch to "ON".

In Pulsed mode, the user can trigger LEDs with internally or externally generated signals. The Pulsed mode Master tab allows different pulse lengths and pulse timings to be defined for each LED. As shown in the image centered below, the Master tab will display a plot of each defined pulse train for a visual comparison of the different signals. The user can set the following parameters: signal polarity, power, delay time, duty time, idle time, and number of cycles. For external pulse generation, the BBC1 breakout box (sold separately) and a user-supplied input signal generator is required. The BBC1 breakout box connects to the Chrolis light source via the included DSUB25 cable and the input signal generator connects to the BBC1 box via one of the BNC connectors marked LED 1 to LED 6.

In the Pulsed mode Master tab, the BBC1 breakout box's additional channels can also be configured. The user can set the six BNC connectors labeled AUX 1 through AUX 6 as either an input or output. These channels can be used to generate trigger signals for other devices like cameras or initiate internal pulse generation for a specific LED. The software also allows the user to create links between channels. This can be used to start LED pulses with a certain delay
after receiving a trigger pulse. For instructions on how to configure the breakout box with the Chrolis software, please see the Chrolis software manual. 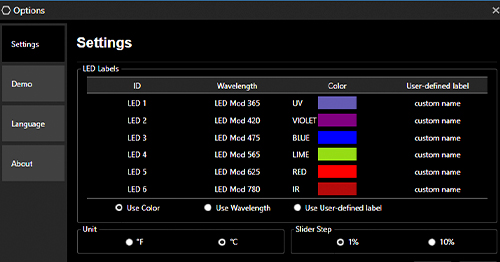 Click to Enlarge
The Chrolis software intuitively detects the LED configuration. In the Settings Window, the installed LED modules are listed, identifying each module's position, nominal wavelength, and color. 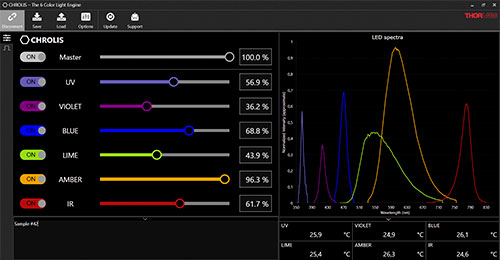 Click to Enlarge
The power level of every LED can be set to a certain percentage. The Master tab in CW mode displays each LED's power level, spectra, and temperature. 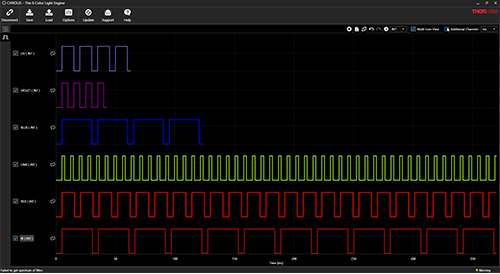 Click to Enlarge
Users can modulate individual LEDs using the Chrolis software. The Maser tab in Pulsed mode shows the unique pulse trains for each LED. 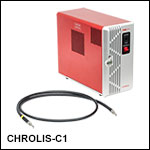 We offer two pre-configured Chrolis 6-wavelength LED source options. Each light source comes with six LED modules and five dichroic mirror modules (see the table below for details). The CHROLIS-C1 and CHROLIS-C2 LED sources are designed for applications in fluorescence microscopy and optogentics.

These light engines are shipped with a LLG03-4H LLG, USB cord, and a region-specific power cord.

To order a custom configuration containing up to six of the LED options listed in the Overview tab, see the configuration tool below.

Click to Enlarge
Dimensions of the Chrolis LED Sources 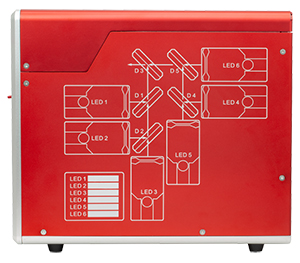 Click to Enlarge
The side panel of the Chrolis light source is engraved with the LED schematic. White labels are provided to allow users to record which LEDs are installed. 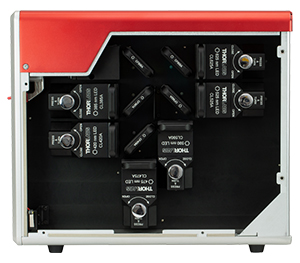 Chrolis 6-wavelength LED sources with user-selected LED wavelengths can be configured using this tool. Use the dropdown menus to select the desired wavelength for each LED slot. Due to the optical configuration, LED slots must be filled from the longest to the shortest wavelength (LED 6 through LED 1). Only a subset of the 11 available LEDs are offered as options for each slot (for example, the shortest wavelength LEDs cannot be assigned to LED 6), and LEDs with closely overlapping spectra (specifically, 405/420 nm and 525/565 nm) cannot be combined in the same source. As each LED is selected, the remaining dropdown menus will update so that only supported wavelength combinations are shown. The appropriate dichroic mirrors and LED positions are pre-set based on the user-selected wavelengths for each source. 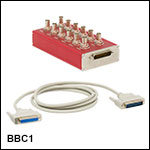 The BBC1 Breakout Box for Chrolis allows users to configure the timing of the Chrolis LEDs with external devices via twelve BNC connectors: six for directly modulating the LEDs with external TTL signals and six for additional AUX channels. When the BBC1 breakout box is connected to the Chrolis, the six BNC connectors labeled AUX 1 through AUX 6 can be configured as either an input or output. These channels can be used to generate trigger signals for other devices like cameras or initiate internal pulse generation for a specific LED. For instructions on how to configure the breakout box with the Chrolis software, please see the Chrolis software manual available by clicking the Docs icon (