Thorlabs' Dichroic Mirrors/Beamsplitters spectrally separate light by transmitting and reflecting light as a function of wavelength. Multi-band dichroic mirrors have three or more bands in which light is transmitted or reflected. Both filters on this page have two transmission bands and at least one reflection band, enabling them to function as longpass and shortpass dichroics. These multi-band dichroic mirrors/beamsplitters are ideal for multiphoton and fluorescence microscopy configurations.

These optics are 35 mm x 52 mm and designed for use at a 45° angle of incidence. They feature a dichroic coating on one surface and an antireflection coating on the opposite surface. We recommend orienting the optics as illustrated in the dichroic mirror diagram above. These mirrors feature a caret on the side that points towards the AR-coated surface, as shown in the image above.

Applications
In multiphoton microscopy, these dichroics are useful in configurations with multiple beam paths for simultaneous 1P, 2P, and 3P imaging. These optics can combine three excitation beams with different wavelengths. For example, in one path, two beams that have a wavelength within the transmission bands can transmit through the dichroic and combine with another beam in a second path that reflects off of the dichroic. These dichroic mirrors can also split spatially overlapping beams of different colors. The multiple transmission bands are ideal for high-speed fluorescence imaging and fluorophore applications. See the Applications tab for more details.

Surface Quality and Durability
Thorlabs' Dichroic Mirrors/Beamsplitters consist of a hard, ion-beam-sputtered coating deposited on a UV fused silica substrate, providing excellent transparency over the operating wavelength range, virtually zero autofluorescence, and a low coefficient of thermal expansion, making them an ideal choice for applications from the UV to the near IR. The hard coatings themselves have a 40-20 scratch-dig surface quality and allow the optics to be cleaned and handled like typical glass. As opposed to soft coatings, they have improved resistance to humidity effects and can withstand high optical irradiation intensities with no noticeable degradation or burns, even under prolonged exposure to ultraviolet light.

Mounting Options
The Cerna® Breadboard Top with Two-Position Slider can be used to mount these dichroics for DIY multiphoton or fluorescence microscopy.

Ray Diagram Illustration
Figure 1 depicts a dichroic mirror/beamsplitter being used to combine a transmitted beam (blue) with a reflected beam (red). The transmitted beam has a wavelength in the transmission band of the optic, and the reflected beam has a wavelength in the reflection band of the optic. If the direction of propagation is reversed, the optic becomes a beamsplitter, as shown in Figure 2.

In both cases, the combined, polychromatic beam is on the dichroic coated side of the dichroic filter. To better direct the reflection, we recommend orienting them such that the wavelength being reflected does not pass through the substrate. Dichroic mirrors/beamsplitters differ from typical beamsplitters in that the beams can be combined or separated without a significant loss of intensity. 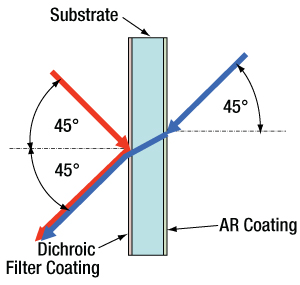 Figure 1. This figure depicts a dichroic mirror being used to combine two beams of different colors. 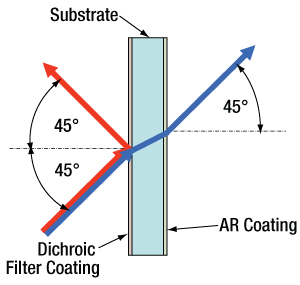 Figure 2. This figure depicts a dichroic mirror being used to split two beams of different colors. 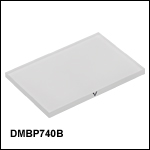 Click Here for Raw Data from 250 - 2500 nm
The blue shaded regions denote the transmission and reflection bands for which the performance is guaranteed to meet the stated specifications. Performance outside the shaded regions will vary from lot to lot and is not guaranteed. 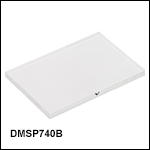 Click to Enlarge
Click Here for Raw Data from 250 - 2500 nm
The blue shaded regions denote the transmission and reflection bands for which the performance is guaranteed to meet the stated specifications. Performance outside the shaded regions will vary from lot to lot and is not guaranteed.