See Contents Tab for Descriptions of Each Item

Slots on the rear of the case allow for wall mounting.

Thorlabs' ESK14(/M) Clamping Forks and Post Holders Kit contains 130 of our most popular items in convenient, organized compartments. Included in this kit are clamping forks as well as universal and pedestal post holders for Ø1/2" posts. Each compartment is labeled with an image of the item as well as the Item #. Refer to the Contents tab above for detailed information about the components included with the imperial and metric versions of this kit. This kit also includes extra dividers and white stickers to create custom labels.

Mounting Options
The kit can be placed onto a tabletop for easy, convenient access or placed on an RK4101 or RK4102 rack shelf, both of which can be installed in our RK3884 standard 19" rack. The image to the right shows an ESK14 kit as well as other custom-labeled ST9 cabinets installed in a 19" rack. The cabinet used in each Essential Series Kit features slots in the rear of the case (see image to far right) for wall mounting and features indentations on the top and four feet on the bottom for stable stacking. Warning: each kit weighs 40 lbs (18.1 kg); ensure that the wall and wall mounts can support at least this weight before mounting the unit. 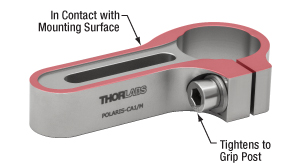