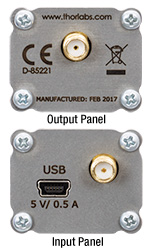 Thorlabs' High-Speed Voltage Buffer increases the available current for a low-impedance load that is being driven by a high-impedance source, while maintaining a 1:1 voltage gain through the system. The buffer has a 20 kΩ input impedance and a 50 Ω output impedance. This makes it ideal when trying to modulate a laser source, such as our 4-channel laser source, with a high-impedance controller, such as NI's PCIe-6321 and PCIe-6363 data acquisition boards.

With a slew rate of 200 V/µs, the buffer can drive a fast analog or digital signal with minimal distortion of the input waveform, as shown in the performance plots below. It accepts an input voltage up to ±5 V and is powered using a side-located USB mini B connector. A USB Mini B to Male A cable is included with the device.

The 50LD buffer is an in-line device that features a box design with two female SMA connectors, allowing it to be easily used between two SMA cables. Due to the larger size of this box, 2.51" x 1.25" x 1.00", it is not recommended that this buffer be attached directly to a load or control device. As shown in the images above, the box is engraved with the part number, input voltage range, input/output impedance values, voltage gain, and slew rate. 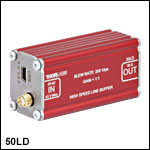 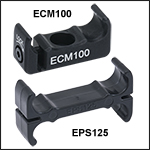 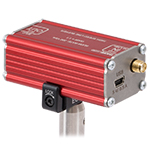 Aluminum Clamps, Post Mountable
These anodized aluminum clamps provide secure mounting for 50LD Electrical Buffer sold above. The ECM100 fits onto the 1.00" side, while the ECM125 fits onto the 1.25" side. The clamp can snap onto the side of the buffer housing and the flexure lock can be tightened using the 2 mm (5/64") hex locking screw on the side.

Plastic Clamp, Double Sided
The EPS125 clamp can attach to the 1.25" side of the 50LD Electrical Buffer sold above. Two electrical buffers can be mounted to a single clamp for a secure and compact setup.