Browse Our Selection of Helium-Neon Lasers

A Helium-Neon laser, typically called a HeNe laser, is a small gas laser with many industrial and scientific uses. These lasers are primarily used at 632.8 nm in the red portion of the visible spectrum. Thorlabs' line of red Helium-Neon gas lasers have stable output powers from 0.5 to 35 mW and a fundamental Gaussian beam. Depending on the model chosen, the output will be either linearly polarized or randomly polarized (unpolarized).

The gain medium of a HeNe laser is a mixture of helium and neon gases in a 5:1 to 20:1 ratio that is contained at low pressure in a sealed glass tube. The excitation source for these lasers is a high-voltage electrical discharge through an anode and cathode at each end of the glass tube. The optical cavity of the laser consists of a flat, high-reflecting mirror at one end of the laser tube and a concave output coupler mirror with approximately 1% transmission at the other end of the laser tube (see figure below). HeNe lasers tend to be small, with cavity lengths from around 15 cm to 0.5 m.

Unpolarized (Randomly Polarized) Beam
The output of an unpolarized HeNe laser consists of a rapidly fluctuating, linearly polarized beam whose polarization orientation changes on a nanosecond time scale. Unpolarized lasers are ideal for applications where there are no polarizing elements in the beam path. Depending on the time scale of an application, large power fluctuations are possible.

Polarized Beam
The state of polarization in a polarized HeNe laser beam is linear, making these lasers ideal for polarization-sensitive applications.

A red HeNe laser is 632.816 nm in air, although it is often reported as either 632 nm or 633 nm. The wavelength gain curve of a HeNe laser is actually made up of several longitudinal modes that fluctuate within the range due to thermal expansion of the cavity and other external factors.

The linewidth of a HeNe laser is specific to the application. The axial mode structure of the HeNe laser is characterized by the number of modes, the free spectral range (FSR), and the Doppler width (see figure below). The linewidth of individual axial modes is usually small (~kHz) and is primarily determined by external factors and measurement timescales, rather than fundamental laser parameters. In most interferometric applications, the most relevant parameter is the coherence length, which is determined by the axial modes that are furthest apart. For a red HeNe laser, the coherence length is approximately 30 cm. 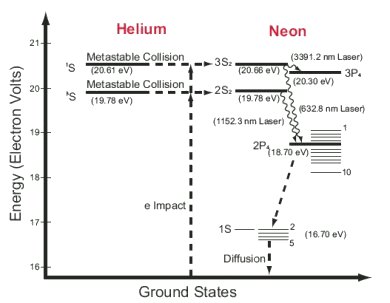 The laser process in a HeNe laser starts with the collision of electrons from the electrical discharge with the helium atoms in the gas. This excites helium from the ground state to a long-lived, metastable excited state. These excited helium atoms then collide with the ground-state neon atoms, producing excited neon atoms. The number of neon atoms entering the excited states builds up until population inversion is achieved. Spontaneous and stimulated emission between the states results in emission of 632.82 nm wavelength light, along with other emission wavelengths (see figure at right). From these states, the electrons quickly decay to the ground state. The HeNe laser's power output is limited because the neon upper level saturates with higher current, while the lower level varies linearly with current.

The laser cavity can be designed with the correct mirrors and length to promote other wavelengths of laser emission. There are infrared transitions at 3.39 µm and 1.15 µm wavelengths and a variety of visible transitions, including a green (543.365 nm), yellow (593.932 nm), yellow-orange (604.613 nm), and orange (611.802 nm) transition (see figure below). The typical red 632.8 nm wavelength output of a HeNe laser has a much lower gain compared to other wavelengths, such as the 1.15 µm and 3.39 µm lines.

Environment is an important factor in achieving optimum laser performance. In dirty environments, the optics can become contaminated, which causes the power output to drop below expected levels. Unstable output beams can be caused by noisy environments with large sources of vibrations. Proper mounting on an optical table can reduce the effects of ambient vibrations. If the environment where the laser is being used fluctuates in temperature, the output power can experience a large amplitude change. While a HeNe laser is less sensitive to variations caused by back reflections, large retro-reflections into the laser can cause unpredictable power changes. A free-space isolator can be used to reduce or eliminate these effects. This line of HeNe lasers is ill-suited to any application or experiment where single frequency or long coherence length is required.