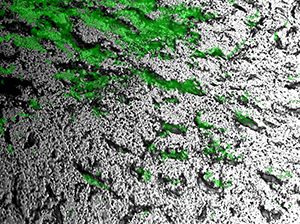 The image above shows a live, simultaneous overlay of fluorescence and near-infrared Dodt contrast images of a 50 µm brain section from a CX3CR1-GFP mouse. More details can be found on the Applications tab. Sample courtesy of Dr. Andrew Chojnacki, University of Calgary.

These two-camera mounts are designed to attach two Thorlabs scientific cameras to an upright Cerna, Olympus, or Nikon microscope, allowing simultaneous imaging of a single optical output. Typical applications include multispectral imaging using a dichroic beamsplitter; for more details please see the Applications tab. A rotation mount allows for 360° of rotational adjustment (±8° fine adjustment) for the reflected camera while a translation mount gives 4 mm linear XY adjustment of the transmitted camera. Both camera mounts have coarse focus adjustment by manually translating the cameras, allowing for parfocalization of both images. The 2CM1 and 2CM2 mounts have up to 15 mm and 11 mm of adjustment, respectively, using the cage rods, although this adjustment range may be limited by the geometry of the camera's front face.

Each mount includes a fluorescence filter cube, which is designed to hold a fluorescence filter set (dichroic mirror, excitation filter, and emission filter) as well as 25 mm x 36 mm plate beamsplitters or other optics (up to 1.1 mm thick). The filter cube consists of a base and top lid with an insert to hold filter set components and has a kinematic design for easy swapping between mounted filter sets without requiring realignment. Additional DFM1T1 top lids for mounting different filter sets are sold separately below. See the Applications tab for example uses.

Microscope Compatibility
The input port of each two-camera mount has external SM1 (1.035"-40) threading that can mate with our SM1-threaded microscope camera port adapters for installation on many commercial upright microscopes. The 2CM1 and 2CM2 mounts place our scientific cameras' sensors at a distance of 4.05" to 4.17" (102.9 mm to 106.0 mm) from the base of the mount, which may be outside the parfocal distance of some microscopes, including inverted microscopes from Nikon and Olympus. For these microscopes, our two-camera mounts can be used if parfocality with the eyepieces is not needed. 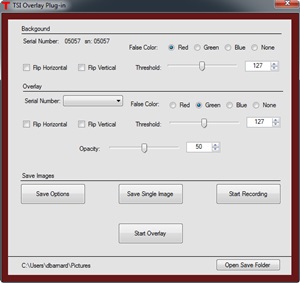 Thorlabs' scientific cameras are based on high quantum efficiency, low-noise imagers, which make them ideal for multispectral imaging, fluorescence microscopy, and other high-performance imaging techniques. Both non-cooled and cooled versions are available. For more details about our camera families, please click on the links in the table to the right.

The ThorCam user interface provided with our scientific cameras includes a plug-in to allow for two live camera images to be overlaid into a real-time 2-channel composite, eliminating the need for frequent updates of a static overlay image. This live imaging method is ideal for applications such as calcium ratio imaging and electrophysiology. As seen to the left, the plug-in controls image threshold and opacity (Alpha) settings, and can apply false color to one of the two monochrome channels. Please refer to the Applications tab for more examples. 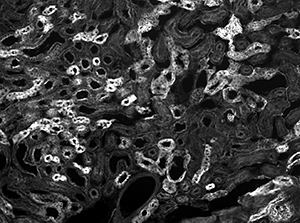 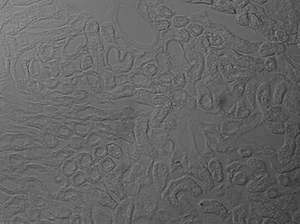 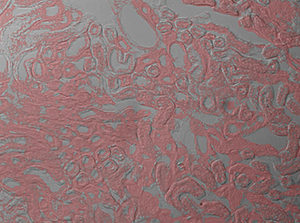 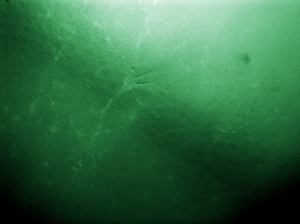 The image to the right shows a live, simultaneous overlay of fluorescence and DIC images. The experiment consists of a microaspiration technique using a micropipette to isolate a single neuron that expresses GFP. This neuron can then be used for PCR. This image was taken with our previous-generation 1.4 megapixel cameras and a two-camera mount and shows the live overlay of fluorescence and DIC from the ThorCam plug-in. Image courtesy of Ain Chung, in collaboration with Dr. Andre Fenton at NYU and Dr. Juan Marcos Alarcon at The Robert F. Furchgott Center for Neural and Behavioral Science, Department of Pathology, SUNY Downstate Medical Center.

The image to the right shows a live, simultaneous overlay of fluorescence and near-infrared Dodt contrast images of a 50 µm brain section from a CX3CR1-GFP mouse, which has been immunostained for PECAM-1 with Alexa-687 to highlight vasculature. The Dodt contrast uses a quarter annulus and a diffuser to create a gradient of light across the sample that can reveal the structure of thick samples. The image was taken with our scientific cameras and a two-camera mount. Sample courtesy of Dr. Andrew Chojnacki, Department of Physiology and Pharmacology, Live Cell Imaging Facility, Snyder Institute for Chronic Diseases, University of Calgary.

The 2CM1 and 2CM2 Two-Camera Mounts can also be utilized with other optics sharing the same 25 mm x 36 mm x 1 mm size of a standard dichroic mirror. The lower left schematic suggests a two-camera imaging system designed for dual wavelength fluorescence imaging with a dichroic mirror. In the right schematic, a 50:50 plate beamsplitter can be used to split the signal evenly; this is useful, for example, for imaging the sample using two different cameras simultaneously. 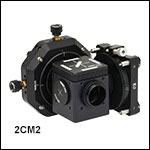 Our 2CM1 and 2CM2 Two-Camera Mounts have SM1-threaded input ports for installation on many commercial microscopes. Each mount places the cameras at the appropriate parfocal distance when used with Thorlabs' Cerna® Series Microscopes with inverted-image trinocs, as well as upright microscopes from Nikon and Olympus. For Cerna Series Microscopes with inverted-image trinoculars and upright Nikon Eclipse microscopes, these mounts can be attached to the trinoc camera port using our SM1A58 camera port adapter. For Olympus BX and IX microscopes, Thorlabs offers the SM1A51 camera port adapter with SM1 threading. These mounts are not compatible with our upright-image trinoculars.

Thorlabs scientific cameras can be mounted using the 4-40 tapped holes on their front plates. Cameras with 60 mm hole spacings, such as our scientific CCD cameras and cooled Quantalux sCMOS camera, can be mounted to the 2CM1 mount. 30 mm cage system compatible cameras, such as our non-cooled Quantalux sCMOS and Kiralux CMOS cameras, can be mounted to the 2CM2 mount. These mounts are identical except the 2CM2 mount includes two LCP4S 30 mm to 60 mm Cage Plate Adapters. These adapters are necessary for cameras that are compatible with 30 mm cage systems. Note that if the two-camera mount is used with a 60 mm cage system camera and a 30 mm cage system camera, only one of the LCP4S adapters will be necessary. The adapter can be purchased separately along with a 2CM1 mount or a 2CM2 mount may be used after removing one of the adapters. 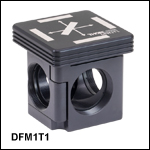 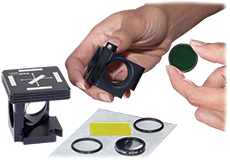 Click to Enlarge
Each filter cube insert can hold a fluorescence filter set: one dichroic mirror, one excitation filter, and one emission filter.

Additional DFM1T1 inserts allow for different filters to be swapped in and out of our two camera mounts. The kinematic design creates a repeatable alignment stop so that the system will not require realignment after the inserts are switched. The image to the right shows a fluorescence filter set being installed in the DFM1T1 insert.