The clear edge design allows mirrors to be arranged in close proximity without clipping input and output beams. 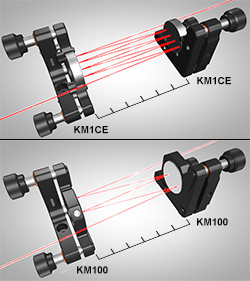 When two KM1CE (top) and two KM100 (bottom) mirror mounts are positioned at the same distance, the clear-edge design of the KM1CE allows more reflections to occur before the beam exits the two-mount system. 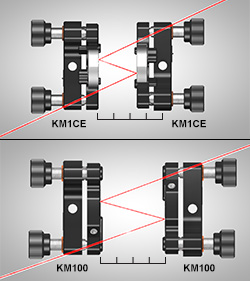 Click to Enlarge
For a two-mirror system designed to provide a single reflection off of each mirror surface, two KM1CE mounts (top) can be positioned in closer proximity than two KM100 mounts (bottom) while still allowing the beam to enter and exit without clipping.

These Clear-Edge Mirror Mounts combine the functionality of our standard or precision mirror mounts with the added advantage of 180° of exposed optic edge. The clear-edge design allows close-proximity beam reflections to pass over the exposed outer radius of the optic without clipping on the mount's front face plate.

Some common applications are shown in the images to the right that compare our popular KM100 mount and the KM1CE. A pair of clear-edge mirror mounts can be placed much closer together than a pair of standard mounts. In addition, the beam can enter and exit the two-mirror system without clipping. Similarly, if two clear-edge mounts and two standard mounts are positioned with the same distance between each pair, the clear-edge design allows the beam to enter at a shallower angle. This provides a higher number of reflections before the beam exits the two-mirror system, an important feature for applications that use a pair of mirrors for dispersion compensation.

Each mount uses two nylon-tipped, 0.05" (1.3 mm) hex setscrews to secure an optic. The cavity that holds the optic is designed to reduce optic distortion in the center of the mirror. For more information on the clamping mechanism, see the Performance tab.

Finite element analysis (FEA) was used to design the optic-holding mechanism of the KM1CE, ensuring that stress on the optic surface is confined to the areas where the three front-located tabs and two setscrews make contact. Stress is the sum of all internal forces acting on a deformable object. The graphic below shows the results of an FEA of the distribution of stress on a BB1-E01 mirror mounted in a KM1CE. The KM2CE and KS1CE will show similar performance characteristics. 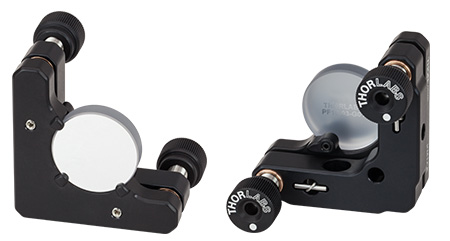 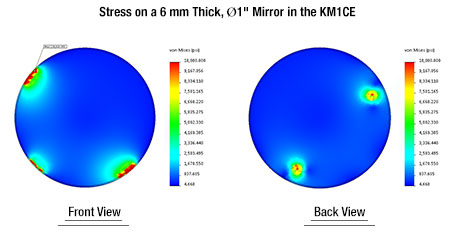 Click to Enlarge
The plot above is an FEA calculation of the stress on a BB1-E01 mirror mounted in the KM1CE Mount. Note that the stress is isolated near the clamping points and the center and clear edge of the mirror are mostly unaffected.

Procedure
A BB1-E01 mirror was installed in the KM1CE and the setscrews in the mount were tightened using the same torque. The wavefront distortion of the mounted mirror was measured using a Zygo interferometer (see the table to the right). The procedure was repeated for four torque values. Screenshots from the Zygo interferometer are shown below.

Results
As seen in the table to the right, the peak-to-valley wavefront distortion remains ≤ 0.4 waves. However, as shown in the stress plot above and four screenshots from the Zygo interferometer below, the majority of this distortion is confined to the edge of the optic where the tabs and setscrews are located, leaving the center and clear edge of the mirror with lower wavefront distortion. 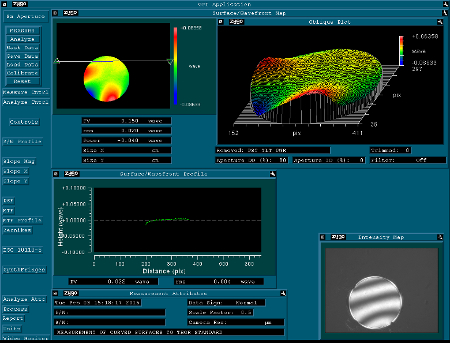 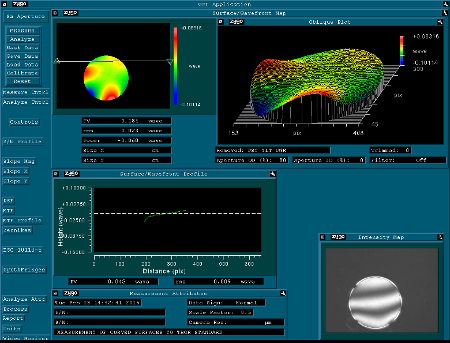 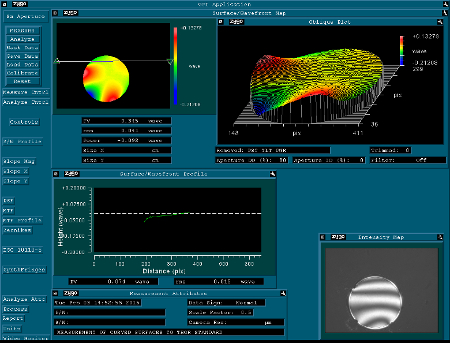 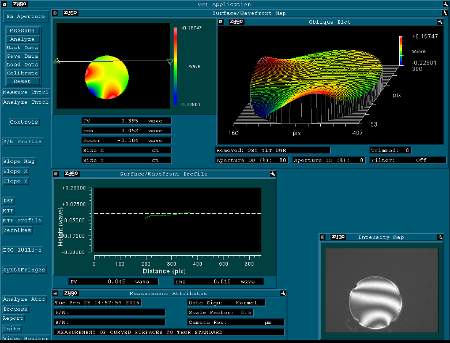 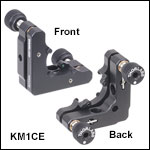 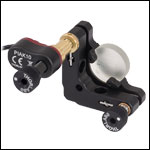 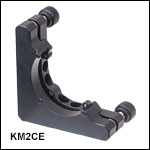 These Clear-Edge Mirror Mounts combine the functionality of our standard KM100 and KM200 mirror mounts with the added advantage of 180° of exposed optic edge. The clear-edge design allows close-proximity beam reflections to pass over the exposed outer radius of the optic without clipping on the mount's front face plate. 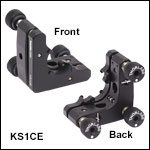 The KS1CE Clear-Edge Precision Mirror Mount combines the increased stability of our KS1 mirror mount with the added advantage of 180° of exposed optic edge. The clear-edge design allows close-proximity beam reflections to pass over the exposed outer radius of the optic without clipping on the mount's front face plate. The KS1CE mount incorporates a thicker back plate and stiffer springs than our KM1CE mount, as well as three lockable adjusters that reduce drift for stable, long-term operation.

The mount uses two nylon-tipped, 0.05" (1.3 mm) hex setscrews to secure Ø1" optics, and features three lockable 1/4"-80 actuators with removable adjuster knobs that provide ±4° of angular adjustment at a resolution of 0.48°/rev (8.3 mrad/rev). A #8 (M4) counterbore is located on each side of the KS1CE mount, allowing it to be mounted in right- and left-handed orientations.