Please Wait
This laser is shipped with a power supply with a universal voltage input.

Thorlabs' Stabilized Helium Neon Laser, with a center wavelength of 632.992 nm, allows for either frequency or intensity stabilization, necessary for many spectroscopy, interferometry, and wavemeter applications. In frequency-stabilized mode, the laser will keep its lasing frequency (i.e., wavelength) constant, while in intensity-stabilized mode, the laser will keep its output power constant. For more details on the stabilization modes, please see the Stabilized HeNe tab. Under normal operating conditions, the lifetime of the HRS015B will be around 25,000 hours. The laser’s output is linearly polarized, with the polarization axis marked by a laser engraved line on the laser’s front face.

The graphs below show the stability of the laser in intensity-stabilized mode and frequency-stabilized mode. As seen in the graph on the left, the HRS015B laser's power stabilizes significantly in less than 15 minutes of operation in intensity-stabilized mode and then reaches the final stabilized value in ~1 hour. If the power to the laser needs to be cycled after reaching stabilization in frequency-stabilized mode, the typical time to relock the laser is ~5 min, as shown in the graph on the right. Please note that the relock time depends on the shut down period as the laser will continue to cool while the power is off. Switching between these modes can be accomplished using the switch on the side of the laser housing, as seen in the Stabilized HeNe tab.

Please note that back reflections into the laser aperture will impair the ability of the control loop to stabilize the frequency or intensity of the laser. Furthermore, large amounts of back reflections can potentially disturb the population inversion of the laser, rendering it unable to lase properly. For instances where back reflections cannot be avoided, Thorlabs recommends using an optical isolator (for example, Item # IO-2D-633-VLP). Additionally, due to the significant ASE background, a bandpass filter should be used for precision measurements.

The laser is housed in a cylindrical tube, which can be conveniently mounted in a V-clamp mount such as Thorlabs' C1513 Kinematic Mount. The Ø1.77" tube is also compatible with our HCM2 HeNe Mount for 60 mm Cage Systems, as pictured above. For details on our assortment of HeNe accessories, please see the HeNe Accessories tab. The front bezel of this stabilized laser is internally SM1 (1.035"-40) threaded for compatibility with any of Thorlabs' SM1-threaded components. The front face also includes an integrated beam stop and an industry-standard 4-40 tapped hole pattern compatible with our SM05AHN SM05-Threaded Adapter and HCL FiberPort Adapter. Please note that when attaching a FiberPort for collimation or coupling, the FiberPort must be intentionally misaligned by a small amount in order to avoid back reflections into the laser aperture.

Thorlabs also offers a 1532.8323 nm Frequency-Locked Laser that can be used as a wavelength reference source.

Click for Details
Click Here for Raw Data
The plot above shows the power fluctuations over an eight hour period in intensity-stabilized mode after a cold start. The fluctuations above represent the percent difference from the average power over the last four hours of measured data. Click on the graph to see a comparison between the power fluctations of the HRS015B and those of the former model.

This laser is shipped with a power supply with a universal voltage input.

Frequency Stabilization Mode
The frequency stabilization mode will balance the intensity of two modes under the gain curve in order to keep the frequency of the laser stable. The tube length is specifically chosen to only allow two cavity modes at the output. The polarization states of the modes are orthogonal (i.e. one will be s-polarized and the other will be p-polarized). Using a polarizing beamsplitter, one of the modes is directed to a photodetector, while the remaining mode passes through a second beamsplitter where 5% of the output is reflected to a second photodetector, as shown in the schematic above. An error signal generated by the two photodetectors is used to control a heater wrapped around the glass tube. The heater causes the tube to expand and contract as necessary to stabilize the frequency. The frequency stabilization mode also delivers some intensity stability. 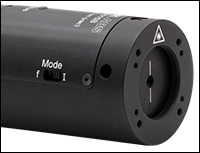 Click to Enlarge
The switch on the side of the laser housing controls the stability mode.

Since our stabilized HeNe features a single mode output, the coherence length is increased to hundreds of meters.

On Thorlabs' HRS015B Stabilized HeNe, either mode can be quickly selected by adjusting the toggle switch (shown to the right) into the desired position. Allow the laser up to 2 minutes to stabilize after the mode has been switched.

Protect Against Back Reflections
Please note that back reflections into the laser aperture will impair the ability of the control loop to stabilize the frequency or intensity of the laser. Furthermore, large amounts of back reflections can potentially disturb the population inversion of the laser, rendering it unable to lase properly. For instances where back reflections cannot be avoided, Thorlabs recommends using an optical isolator (for example, Item # IO-2D-633-VLP). Additionally, due to the significant ASE background, a bandpass filter should be used for precision measurements. 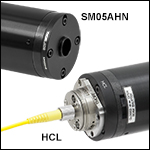 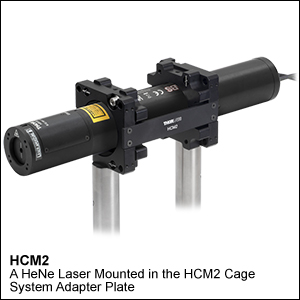 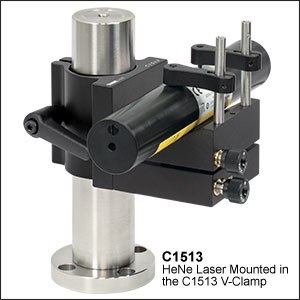 HeNe lasers should be handled and mounted with care to protect them from damage.

Never apply a bending force to the laser housing. Stress applied to the laser's external housing can misalign or damage components in the laser cavity. This can:

Factory packaging protects the HeNe lasers from shocks and vibrations during shipping, but end users directly handle the bare laser housing. Due to this, HeNe lasers are in greater danger of experiencing dangerous stress during handling by the end user.

A result is that the primary cause of damage to HeNe lasers is rough handling after receipt of the laser. In extreme cases, shock and vibrations can shatter or fracture glass components internal to the laser.

To maintain the optimum performance of your HeNe laser, do not drop it, never use force when inserting it into fixture, and use care when installing it into mounts, securing it using cage components or ring accessories that grip the housing, transporting it, and storing it.

HeNe lasers will provide optimum performance over a long lifetime when they are handled gently.