Click to Enlarge
When an engraved lens tube is attached to another lens tube, the engraving of the connected end is no longer visible.

Lens tubes are ideal for creating compact optical subassemblies. The Ø1/2" lens tubes sold here can be used to house one or several optical elements, as shown in the diagram of a beam expander below. Optics are separated and secured by retaining rings that are positioned at the desired depth within the lens tube using our SPW603 or SPW603L spanner wrenches. Depending on the item purchased, one or two retaining rings are included (see below for details). Additional retaining rings can be purchased separately. In addition to the Ø1/2" lens tubes featured on this page, Thorlabs also offers Ø1", Ø30 mm, Ø1.5", Ø2", and Ø3" versions, each of which is equipped with an SM series thread standard that depends on the tube diameter. Vacuum-compatible versions of our Ø1/2" and Ø1" stackable lens tubes are available from stock; customers can request vacuum-compatible lens tubes at other lengths and diameters by contacting Tech Support.

The following is a general overview of screw threading. For more details regarding specifications and dimensions, please consult the Machinery's Handbook, available for purchase at many bookstores.

Features of a Thread
A thread consists of three repeating features: a crest, flank, and root (see drawing to the right). Except in special cases, threads have symmetrical sides inclined at equal angles when a vertical line is drawn through the center of a crest or root. The distance between corresponding points on adjacent threads is known as the pitch of the thread. The flank angle is defined as the angle the flank makes with a perpendicular ray drawn from the screw axis. Unless otherwise stated, threads have a flank angle of 30°, resulting in a total angle between flanks of 60°. Each feature is shown in the diagram to the right.

Thread Form
A thread form is a set of rules that define the features' scale relative to one another. Common thread forms include the Unified Screw Thread Form, used in the United States of America and measured in imperial units, and the ISO Metric Screw Thread Form, used in many parts of the world and measured with the International System of Units. There are many thread forms in the Unified screw thread standard designated by either UN, which defines a flat root contour, or UNR, which defines a round root contour. These can be further described by appending more letters. For example, an extremely fine thread with a flat root contour is designated UNEF. Those forms which are not standardized by the Unified screw thread system are designated UNS.

Thread Series
Most screws are identified by their thread series. Thread series are denoted by the major diameter and density of threads. Unified threads specify density in threads per inch, while Metric threads specify the thread pitch. For example, in the Unified nomenclature, a 1/4"-20 cap screw has a 1/4" diameter barrel and the pitch is 20 threads per inch (TPI). In metric nomenclature, an M4 x 0.7 cap screw has a 4 mm barrel and the pitch is 1 thread per 0.7 mm. The term M4 x 0.7 is often shortened to just M4.

Thread Class
The tolerances and allowances on a thread series are given by a thread class. Unified thread classes are alphanumeric identifiers starting with a number from 1 through 3, where 1 is the loosest tolerance and 3 is the tightest, and either A for external threading or B for internal threading.

Thorlabs' SM Series Threads
Threading specifications for our SM threads, utilized in our lens tube and cage system components, are given below so that you can machine mating components to suit your application. Most SM series threads utilize a non-standard Unified thread form, indicated by the letters UNS, with a 30° flank angle and a thread class of 2A and 2B. The exception is our SM30 series thread, which is a Metric thread form with a 30° flank angle and a tolerance of 6H/6g. We also offer products with C-Mount and RMS threads, and the specifications for these threads are given below for reference. Please note that other manufacturers may have different tolerances for C-Mount and RMS threads. For other thread specifications that are not listed here, please contact Tech Support. 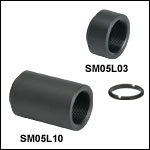 These stackable Ø1/2" lens tubes provide a fast and easy means for building compact optical assemblies. Their stackable design and direct interfacing with any SM05-threaded (0.535"-40) components provide flexibility for complex optomechanical assemblies. One SM05RR Retaining Ring is included with each lens tube. 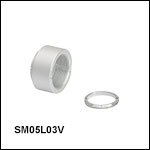 Click to Enlarge
Vents along the threading and at the ends of these tubes provide a free path for air to escape when under vacuum.

These stackable Ø1/2" lens tubes provide a fast and easy means for building compact optical assemblies. Their stackable design and direct interfacing with any SM05-threaded (0.535"-40) components provide flexibility for complex optomechanical assemblies. Made from 6061-T6 aluminum, these lens tubes are vacuum compatible down to 10-6 Torr. One vacuum-compatible SM05-threaded retaining ring is included with each lens tube. Please contact Tech Support for replacements.

These vacuum-compatible lens tubes feature venting channels along the internal threading and at the ends of each tube. These channels allow air trapped between mounted optics an easy means of escape during pumpdown. 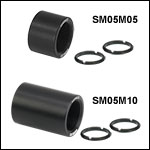 Unlike our Ø1/2" stackable lens tubes featured above, these internally threaded lens tubes do not feature a lip at one end nor do they have external SM05 threading. Therefore, optics housed inside can be accessed from both ends. To join these lens tubes end-to-end, use an SM05T2 Lens Tube Coupler. Two SM05RR Retaining Rings are included with each lens tube. 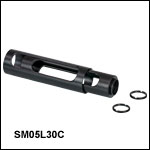 Click to Enlarge
The dust cover can be opened or closed by rotating it in either direction.

These stackable Ø1/2" lens tubes with side slots provide a fast and easy means for building complex optical assemblies and adjusting the optics without disassembling the setup. Optics can be inserted into the tube and locked into position using the included SM05RR retaining rings. Simply thread the first retaining ring to the desired depth, add the optic, and then use a second retaining ring to secure the optic. Optics can be manually adjusted via the side slots without the use of a spanner wrench. The rotatable slip shield included with the lens tube has an inner diameter of 0.71" (17.9 mm) and fits over the lens tube slots to prevent unwanted light from entering the system and to keep the optical setup free from debris. 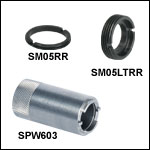 The SM05RR is our standard anodized aluminum retaining ring that ships with our Ø1/2" lens tubes as well as many other Thorlabs components and is available individually and in packs of 10. We offer six different SM05-threaded (0.535"-40) retaining rings, shown in the table to the right, which have unique features and can replace an SM05RR retaining ring. Please keep in mind that due to the increased thickness of some retaining rings, the maximum optic thickness that can be housed inside our standard SM05-compatible mounts will be diminished in some cases.

Spanner Wrenches
We offer three spanner wrench choices that can be used with these retaining rings. The SPW603 and SPW603L Spanner Wrenches have a hollow design that enables retaining rings for our SM05 series of lens tubes to be adjusted and installed without obscuring the beam path. For use with longer lens tubes, multiple SPW603 spanning wrenches can be stacked to extend the wrench's maximum reach. Alternatively, the SPW801 Adjustable Spanner Wrench can also be used to position SM05-threaded retaining rings. Please note that the SPW801 wrench can withstand a maximum torque of 80 inch-pounds. We also offer the SPB05 Spanner Bit, which can be used with a standard 1/4" hex driver (sold separately). The SPB05 is included as part of the SPB600 Spanner Wrench Bit Kit.