The MPC220 controller, loaded with a Ø900 µm jacketed FC/PC patch cable, is mounted to an optical table using the three mounting slots and 1/4"-20 (M6) cap screws.

Thorlabs' Motorized Fiber Polarization Controllers are paddle-based polarization controllers that use stress-induced birefringence within a fiber to dynamically control the output polarization state of light. Their compact size and integrated DC servo motors allow these controllers to be easily incorporated into larger, more complex systems. Each individual paddle can be rotated 170° with a minimum step size of 0.12°, providing full coverage of the Poincaré sphere. These controllers, made from Black Acrylonitrile Butadiene Styrene (ABS), are empty and designed to be used with a single mode fiber or fiber patch cable with a Ø900 µm jacket.

The motorized polarization controllers are available in either two- or three-paddle configurations, with each paddle accommodating up to four 18 mm diameter fiber loops. Stress-induced birefringence is created by bending the fiber; this creates two principle axes in the fiber, one perpendicular to the plane of the loop (slow axis) and the other in the plane of the loop (fast axis). As a result, wrapping the fiber around the fiber spools creates independent wave plates that alter the state of polarization, while rotating the paddles produces a change in polarization by adjusting the fast axis of the fiber with respect to the transmitted polarization. Please see the Operations tab for more information on the operating principle, as well as the recommended fiber types and number of loops needed to achieve specific retardation behaviors.

Paddle numbers are etched into the base plate at two locations and in two orientations.

Click to Enlarge
A mounted MPC220 controller is loaded with a Ø900 µm jacketed FC/PC patch cable. The connected USB cable is used for power and communication with the Kinesis software.

Fiber Organization and Mounting
To securely hold the fiber in place, clamps are included before and after the paddles. These can be removed for easy fiber loading and unloading by loosening the M2.5 screws with a 2 mm hex key or balldriver. The controller body, as well as the fiber spools, also features guides to aid in fiber organization. These fiber guides along the base plate are visible in the application image shown to the right.

Both the two- and three-paddle motorized polarization controllers include a base plate featuring clearance slots that accept 1/4"-20 or M6 cap screws. This allows the controller to be mounted to either 1" or 25 mm pitch optical tables and breadboards at any orientation. The paddles are numbered at their base in two locations to help identify the paddles, as shown in the image to the right.

Paddle Rotation with Kinesis Software
The motorized polarization controllers are powered via USB, which connects to a control PC or a powered hub. A USB A to Micro USB Type B cable is included with each controller.

Paddle rotation is driven by Thorlabs' user-friendly Kinesis software package. For 'out of the box' operation, paddle movements such as homing, jogging, and absolute positioning can be manually controlled through a graphical user interface (GUI) panel. To control the polarization paddles without user intervention, the Kinesis package also includes a set of programming interfaces, which allow move sequences to be programmed in several development languages. For more information on the Kinesis software or creating custom applications, please see the Kinesis Software and Kinesis Tutorial tabs, respectively.

Here, φ is the retardance, a is a constant (0.133 for silica fiber), N is the number of loops, d is the fiber cladding diameter, λ is the wavelength, and D is the loop diameter. While this equation is for bare fiber, the solution for Ø900 µm jacketed fiber will be similar enough that the results for this equation can still be used (i.e., the solution will not vary by a complete loop N for Ø900 µm jacketed fiber).

Recommended Number of Loops
The retardation per paddle is a function of loop number and the cladding diameter of the fiber if the loop diameter is fixed. Figures 1 and 2 show the calculated retardation per paddle for Ø80 µm and Ø125 µm clad fiber, respectively. Due to their small size, the MPC220 and MPC320 motorized polarization controllers cannot accomodate more than four loops, each with an 18 mm diameter, per paddle.

Click to Enlarge
Figure 2: Plot of the retardance per paddle for bare silica fiber with Ø125 µm cladding on an 18 mm loop diameter.

Click to Enlarge
Figure 1: Plot of the retardance per paddle for bare silica fiber with Ø80 µm cladding
on an 18 mm loop diameter.

Recommendations for the number of loops and fibers for several wavelengths are given in the following table. The number of loops, calculated from the equation above or determined from Figure 2, are the values that best approximate quarter-wave and half-wave retardation: 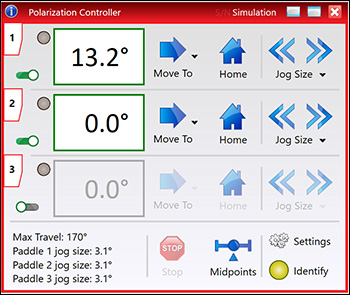 Thorlabs Kinesis® software package can be used to control devices in the Kinesis or APT family, which covers a wide range of motion controllers ranging from small, low-powered, single-channel drivers (such as the K-Cubes™ and T-Cubes™) to high-power, multi-channel, modular 19" rack nanopositioning systems (the APT Rack System).

The Kinesis Software features .NET controls which can be used by 3rd party developers working in the latest C#, Visual Basic, LabVIEW®, or any .NET compatible languages to create custom applications. Low-level DLL libraries are included for applications not expected to use the .NET framework. A Central Sequence Manager supports integration and synchronization of all Thorlabs motion control hardware.

The software packages allow two methods of usage: graphical user interface (GUI) utilities for direct interaction with and control of the controllers 'out of the box', and a set of programming interfaces that allow custom-integrated positioning and alignment solutions to be easily programmed in the development language of choice.

The Kinesis Software Package, which includes a GUI for control of Thorlabs' Kinesis and APT™ system controllers.

C#
This programming language is designed to allow multiple programming paradigms, or languages, to be used, thus allowing for complex problems to be solved in an easy or efficient manner. It encompasses typing, imperative, declarative, functional, generic, object-oriented, and component-oriented programming. By providing functionality with this common software platform, Thorlabs has ensured that users can easily mix and match any of the Kinesis controllers in a single application, while only having to learn a single set of software tools. In this way, it is perfectly feasible to combine any of the controllers from the low-powered, single-axis to the high-powered, multi-axis systems and control all from a single, PC-based unified software interface.

The Kinesis System Software allows two methods of usage: graphical user interface (GUI) utilities for direct interaction and control of the controllers 'out of the box', and a set of programming interfaces that allow custom-integrated positioning and alignment solutions to be easily programmed in the development language of choice.

For a collection of example projects that can be compiled and run to demonstrate the different ways in which developers can build on the Kinesis motion control libraries, click on the links below. Please note that a separate integrated development environment (IDE) (e.g., Microsoft Visual Studio) will be required to execute the Quick Start examples. The C# example projects can be executed using the included .NET controls in the Kinesis software package (see the Kinesis Software tab for details).

LabVIEW
LabVIEW can be used to communicate with any Kinesis- or APT-based controller via .NET controls. In LabVIEW, you build a user interface, known as a front panel, with a set of tools and objects and then add code using graphical representations of functions to control the front panel objects. The LabVIEW tutorial, provided below, provides some information on using the .NET controls to create control GUIs for Kinesis- and APT-driven devices within LabVIEW. It includes an overview with basic information about using controllers in LabVIEW and explains the setup procedure that needs to be completed before using a LabVIEW GUI to operate a device.

For our experiment, we used the S1FC1310 Fabry-Perot Benchtop Laser (1310 nm) as the light source and couple it into a Ø900 µm tight-buffer fiber. The fiber was mounted through a FPC030 Fiber Polarization Controller, and the output was collimated into a free-space beam with a fiber collimator. From here the beam was measured, either directly by a polarimeter or through an analyzer assembly consisting of a λ/4 wave plate, a linear polarizer, and a power meter.

Figure 2 summarizes the measured results for manipulating the polarization of light in a fiber as a function of rotation and twist forces and is shown on the Poincaré sphere. The colored lines represent one of the three paddles of the FPC030 and correspond to the colored numbers of Figure 1. To produce quarter-wave plate behavior, the fiber needed to be looped around a paddle two times, and for half-wave plate behavior it was 3 times. For the results presented in Figure 2, we used the FPC030 FPC in a 2-3-2 loop configuration. As shown in Figure 2, starting at any arbitrary polarization state, it is possible to achieve any desired polarization state through rotating each paddle through a number of iterations. This manipulation of the polarization by the FPC does not produce intrinsic loss nor back reflections; instead stress-induced birefringence is utilized as a mechanism for rotating the polarization of light in fiber. Data is presented for each of the paddles of the FPC and the polarization changes due to these are mapped out on Poincaré spheres. For details on the experimental setup employed and the results obtained, please click here.