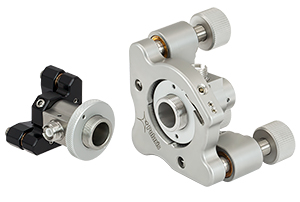 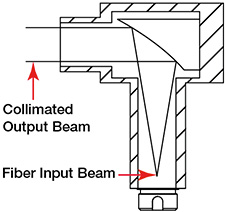 Thorlabs' UV-Enhanced Aluminum Reflective Collimators are based on a 90° off-axis parabolic mirror. Metallic mirrors, unlike lenses, have a focal length that remains constant over a broad wavelength range. Due to this intrinsic property, parabolic mirror collimators do not need to be adjusted to accommodate various wavelengths of light, making them ideal for use with polychromatic light. Common applications include systems that utilize multiple wavelengths that need to be collimated, collimation/coupling in the UV, and coupling polychromatic light into large-core multimode fiber.

These UV-enhanced aluminum reflective collimators offer excellent reflectivity within the 250 nm - 450 nm wavelength range; please see the Specs tab for more information. In multiple-wavelength systems operating in the UV and visible, these reflective collimators can be used to both couple polychromatic collimated light into large-core multimode fiber or collimate polychromatic light emitted by optical fibers. When collimating light from a multimode patch cable, the fiber NA should be <0.40 (RC02), <0.36 (RC04), <0.167 (RC08), or <0.216 (RC12) to avoid clipping light on the housing. Note too that, in general, light from a multimode fiber cannot be well collimated. For more information on how to optimize coupling of light from an optical fiber, please see the Collimation Tutorial tab.

The RC02, RC04, and RC08 reflective collimator housings are equipped with external SM05 (0.535"-40) threads while the RC12 housing has external SM1 (1.035"-40) threads. This makes them directly compatible with our SM05- or SM1-threaded optomechanics, such as the LMR05(/M) or LMR1(/M) lens mounts, respectively. The back of the RC02 collimators are machined down to Ø1/2", enabling direct mounting into a Ø1/2" kinematic mount (see image to the right). Furthermore, the RC02, RC04, and RC08 may be directly mounted to Ø1" kinematic mounts by removing the knurled ring on the front of the housing, holding the housing behind the kinematic mount's Ø1" counterbore, and then rethreading the knurled ring over the back lip of the counterbore and onto the housing using an SPW909 Spanner Wrench or an SPW801 Adjustable Spanner Wrench. The collimator can then be secured by tightening the mount's setscrew. The completed setup is shown in the image to the right.

Scattering from the mirror surface is minimal (~2% @ 633 nm) and results from the <100 Å RMS surface roughness achieved by the diamond turning process used to manufacture the off-axis parabolic mirror.

Click to Enlarge
Low-NA Fiber: The green line indicates the envelope of the beam as it diverges and is collimated by the OAP mirror.

Selecting a Collimator Based on Desired Output Beam Diameter

When using a reflective fiber collimator to collimate light from a fiber patch cable, selection of the appropriate mirror is often done based on the desired output beam diameter and the numerical aperture (NA) of the fiber. The fiber NA determines the divergence of the light emitted by the fiber prior to being collimated by the off-axis parabolic (OAP) mirror in the reflective collimator. The fiber NA is related to the divergence half angle of the fiber by the relationship:

where θ is the divergence half angle and n is the refractive index of the surrounding medium. The collimated beam diameter that results from a diverging light source incident on an OAP mirror is related to the reflected focal length (RFL) of the OAP and the fiber NA; it can be determined using the following equation using the small angle approximation:

where d is the beam diameter. Depending on how the NA of the fiber is specified, the above equation may result in a beam diameter specified at the 5% or 1% level rather than the 1/e2 level. The theoretical divergence of the collimated beam can be calculated using the following equation:

Although the beam can theoretically be expanded to a given beam diameter, there are two major limitations on collimation with multimode fibers. The large divergence angle of most multimode fibers (e.g., NA = 0.22, 0.39, or 0.50) will cause light to be clipped by the collimator housing before it reaches the OAP mirror (as shown in the image to the right). Therefore, when collimating light from a multimode patch cable, the fiber NA should be <0.40 (RC02), <0.36 (RC04), <0.167 (RC08), or <0.216 (RC12) to avoid clipping light on the housing. The divergence angle is also slightly affected by the fiber core diameter; the maximum NA allowed will decrease slightly as the core diameter increases. If the beam diameter is larger than the clear aperture of the reflective collimator, then the output beam will be clipped by the collimator housing. Both scenarios may result in reduced quality of the output beam.

The table below lists the output beam diameter as a function of the reflected focal length of the mirror and the NA aperture of common single mode and multimode fibers.

Click on the collimator type or photo to view more information about each type of collimator.

Scroll down to read about the unique properties of off-axis parabolic (OAP) mirrors and how to take advantage of them:

Why a Parabolic Mirror Instead of a Spherical Mirror?

Figure 2: Spherical mirrors do not reflect all rays in a collimated beam through a single point. A selection of intersections in the focal volume are indicated by black dots.

Click to Enlarge
Figure 1: Parabolic mirrors have a single focal point for all rays in a collimated beam.

Parabolic mirrors perform better than spherical mirrors when collimating light emitted by a point source or focusing a collimated beam.

Collimating Light from a Point Source
A point source emits light in all directions. When this highly divergent light source is placed at the focal point of a parabolic mirror, the output beam is highly collimated. If the point source were ideal, all reflected rays would be perfectly parallel with one another.

When a point source is placed within a spherical mirror's focal volume, the output beam is not as well collimated as the beam provided by a parabolic mirror. Different rays from the point source are not perfectly parallel after reflection from the spherical mirror, but two reflected rays will be more nearly parallel when they reflect from more closely spaced points on the spherical mirror's surface. Consequently, the quality of the collimated beam can be improved by reducing the area of the reflective surface. This is equivalent to limiting the angular range over which the source in the focal volume emits light.

Benefit of an Off-Axis Parabolic Mirror

Click to Enlarge
Figure 4: An off-axis parabolic mirror can be thought of as a section of the larger parabolic shape. Both have the same focal point, but it is more accessible in the case of an OAP mirror.

One of the primary benefits of a concave parabolic mirror is its single focal point. All rays travelling parallel to the mirror's axis are reflected through this point. This is useful for a range of purposes, including imaging and manufacturing applications that require focusing laser light to a diffraction limited spot.

There are a few negatives associated using with using conventional parabolic mirrors, which are symmetric around the focal point (Figure 3). One is that the sides of the mirror generally obstruct access to the focus. Another is that when the mirror is used to collimate a divergent light source, the housing of the light source blocks a portion of the collimated beam. In particular, light emitted at small angles with respect to the optical axis of the mirror is typically obstructed.

Click to Enlarge
Figure 6: The reflective element of the collimator is an off-axis parabolic mirror. The mirror's substrate is highlighed in red. The shape of the reflective surface is a segment of the parabolic curve displaced from the vertex. The focal points of the parent parabola and the OAP mirror coincide. 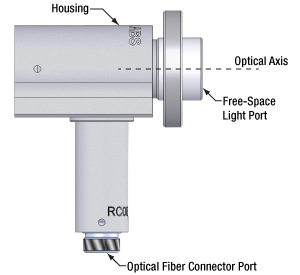 Click to Enlarge
Figure 5: Thorlabs offers reflective collimators that include a port for an optical fiber connector and a port for free space, collimated light that propagates parallel to the optical axis.

The two ports on Thorlabs' reflective collimators are not interchangeable. One port accepts an optical fiber connector and requires the highly divergent light of a point source. The other port is designed solely for collimated, free-space light (Figure 5).