The DRV120 Installed on a Thorlabs 6-Axis NanoMax Stage 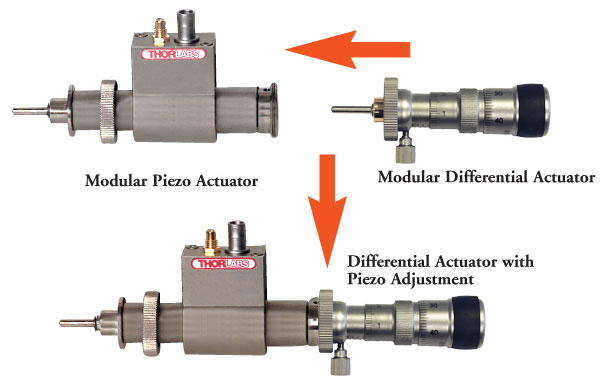 The DRV120 Piezo Drive is designed to add additional travel range and control to our NanoMax™ Flexure Stages. Compatible piezo controllers, available separately, are listed in the table to the below. In addition, when used with our Modular Quick-Connect Adapters, the actuator can be fitted to any of our stages that accept a Ø9.5 mm (Ø3/8") or Ø10 mm (Ø0.39") mounting barrel. These extenders are ideal for applications requiring high-resolution movements over a small range. The DRV120 offers 20 µm of travel with feedback position sensing.

The piezo actuator fits between the stage and existing actuator, as shown in the example to the right with a DRV3 differential actuator. The DRV004, DRV208, and legacy DRV001 can also be used with the modular piezo drive. 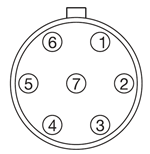 Knowing the rate at which a piezo is capable of changing lengths is essential in many high-speed applications. The bandwidth of a piezo controller and stack can be estimated if the following is known:

To drive the output capacitor, current is needed to charge it and to discharge it. The change in charge, dV/dt, is called the slew rate. The larger the capacitance, the more current needed:

For example, if a 100 µm stack with a capacitance of 20 µF is being driven by a BPC Series piezo controller with a maximum current of 0.5 A, the slew rate is given by

Hence, for an instantaneous voltage change from 0 V to 75 V, it would take 3 ms for the output voltage to reach 75 V.

From the first equation, above:

For the example above, the maximum full-range (75 V) bandwidth would be

For a piezo actuator driven by a triangle wave of max voltage Vpeak and minimum voltage of 0, the slew rate is equal to the slope:

For additional information about piezo theory and operation, see the Piezoelectric Tutorials page.